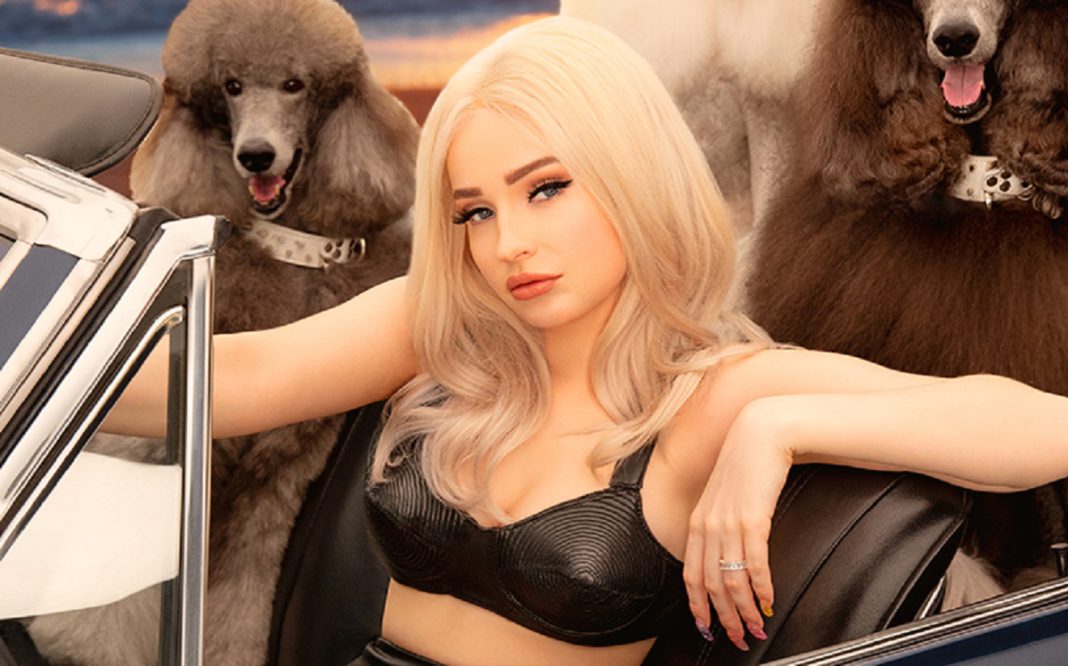 If someone sings “there will be blood” and “my heart will break”, don’t freak out! It’s just two hits from the young German artist, now residing in the City of Angels in the United States. In the 2000s, Kim Petras made headlines when she became the youngest operated transgender in the world at 16. Today, the new princess of pop went international with songs like “I Don’t Want It All” and “UnHoly”!

1. “Unholy” with Sam Smith, lights up the charts:

Today, the German native is rocking the music scene thanks to her collaboration with British pop star Sam Smith on the hit ‘ Unholy ‘.

The song, which is a huge hit on Instagram as well, has reached the top of the charts in many countries, including the United Kingdom, Australia, and Canada. Kim was also ranked first in the US Billboard’s Global 200 ranking of the most promising artists of her generation.

The youngest operated transgender in the world, Kim Petras is now gaining influence thanks to her music

Indeed, Kim Petras has now become a very influential figure in the QUEER community. Her media exposure commits her to changing mentalities, particularly through music. With the success of “Unholy”, the young German also intends to “break the cycle” of trans artists who are “paid a pittance”, she says to Variety.

3. One of the youngest kids to have surgery:

From the age of two, her parents say that she claimed to be a woman. They have always supported her in her transition, from medical treatment until her operation in 2008 at the age of 16, making her then the youngest person in the world to undergo this procedure.

‘I was asked if I felt like a woman now – but the truth is I’ve always felt like a woman – I just ended up in the wrong body,’ she told the Telegraph shortly after her operation. She also credits her success to having fully transformed by the age of 16.

Kim Petras, who recently made her acting debut in the series “Los Espookys” (an American comedy television series) is currently in the process of polishing her new single “If Jesus Was A Rockstar”.

At the end of 2021, she also played her own role in the Christmas TV movie “The Bitch Who Stole Christmas”.

During a 2019 interview for the site Idolator, the singer, also a songwriter, indicated that pop music was for her an escape from her problems: “I feel like pop music saved my life in many ways”. Her light and sunny title, Malibu, released in May 2020, is another example of when Kim wanted to turn the page following a breakup.

Her goal is to make music to dance to and help her forget all the stupidity that surrounds us.

6. Her early success came from gay bars in LA:

Her success, she says, owes it above all to many small gay bars in Brooklyn who started playing her early songs because they liked them. Kim feels indebted to the LGBTI+ community, to which she belongs as a trans woman.

Fed up with pop hits released at the turn of the 2000s, Kim Petras left her native Germany to

break into music in the United States, armed with a gift for stringing together unstoppable toplines and an unwavering will.

While her classmates revise their Pythagorean theorem, she devotes herself to songwriting and creates her first models on GarageBand, then in recording studios. After signing a contract with Universal Germany which led her to compose a jingle for a brand of detergent, she understands that her career may never take off in Germany and flies to the City of Angels, leaving the suburbs of Cologne where she grew up without regrets.

“I was excited, but I didn’t know anyone there, other than a few producers I had met online. I had worked as a waitress in Germany and saved up the money to come to LA to become a songwriter . I saw it as a gateway to then becoming an artist and producing my own music. I’ve written lyrics for a lot of singers in LA, including JoJo and Fergie. Writing a song for her also allowed me to sign a contract to release my own sounds”, she confessed during one interview.

When the real journey begins it is one that takes her on stage all over the United States, before collaborating with the cream of the pop avant-garde — Charli XCX ( ” Unlock It “, ” Click “ ), SOPHIE ( “ 1,2,3 dayz up ” ) —, then to release her first album (although she does not really recognize it as such, judging that it does not focus enough on a specific theme), composed after a breakup. Drawing on eclectic registers, evoking The Weeknd ( ” Icy ” ), Daft Punk ( ” Sweet Spot ” ) or even 90s hip-hop ( ” Got My Number“ ), it brings together 12 addictive songs centered on sentimental disappointment and the quest for a new partner.

In May 2020, she then unveiled “Malibu”, a playful single from her long-awaited first official LP, which she wishes to design as a “concept album” homogenized by a strong red thread. The opportunity for the peroxidized blonde beauty to establish her place as a duly deserved popstar and of which she has long dreamed

Kim wants to be a “poptimist”, as she says herself, and wishes to pursue her career by being recognized for her talent above all.

Kim sings a joyful, tangy and slightly provocative pop that has nothing to envy to that of Katy Perry or Taylor Swift. Signed on the label of superproducer Dr Luke (who has worked for Britney, Katy Perry and Rihanna), Kim Petras is the American answer to the English label PC Music, known for its offbeat pop music based on highly doctored female voices, an avalanche of electronic sounds and vaporwave aesthetic. Her music videos feature colorful, do it yourself visuals, and bet everything on the 2000s nostalgia that’s rampant right now; she even invites the former queen of people Paris Hilton to make an appearance in one of them.

Kim Petras, only 13 years old, first took part in her first television show on Stern TV, for the German small screen. In 2007, she published her first musical creations on the internet. She was then spotted by producer Fabian Görg who allowed her to release her first song online entitled “Last Forever”.

She sings “Fade Away” while two singles appeared in 2009 called: “Boomerang” and “Die For You”.

Two years later, Kim Petras released her first EP album: “One Piece of Tape”. During 2013, she collaborated with DJ Klaas on “Heartbeat” and “Flight to Paris”. Meanwhile, Kim Petras continues to do covers for her YouTube channel. The singer says that this exercise allows her to find her own musical identity.

In 2014, Kim Petras made a new remarkable incursion with the song “STFU”, posted on the SoundCloud platform. The German singer also works with many producers, such as Stephen Dresser, Edward Ellis, CJ Abraham or Aaron Joseph. Isaac Phase asked her to sing alongside him on the title “You”, in 2015.

For Kim Petras, the year 2017 marked a turning point in her musical career.

In 2017, her single “I Don’t Want It at All” broke through in the United States and billboard magazine quickly inducted her as “Princess of Pop” as her clips garnered millions of views on YouTube. Since then, the singer has been considered one of the 20 most influential LGBTI personalities in the world, according to Vanity Fair.

Her song quickly entered the Spotify top 50 in the United States.

As she was able to reach the international sphere with her single “I Don’t Want It At All”, she began to compose for other artists, notably Fergie of the Black Eyed Peas and JoJo. In a register mixing dance pop, electro-pop and bubblegum pop, she continues with “Hillside Boys” and “Slow It Down”. Kim Petras collaborates with Lil Aaron for “Faded” and Baby E for “Hills.”

After participating in the “Pop 2” compilation by Charli XCX (also known for “New Shapes” ), Kim Petras worked with Jay Park for the song “Unlock It”. In 2018, she continued with new singles such as “Can’t Do Better”, “All The Time”, without forgetting “Heart to Break”. She performs a feature with the DJ trio Cheat Codes: “Feeling of Falling”.

Also in 2018, Kim Petras released a special Halloween EP entitled “Turn Off The Light, Vol. 1”, then a second, “Spotify Singles”. On the occasion of the Bloom Tour, she opened for Troye Sivan’s concerts. She also composed the song “Young & Wild” for the group Twice.

Particularly prolific, Kim Petras connects successes and songs. In 2019, she released no less than 6 singles, including “Icy”, “Homework” with Lil Aaron and “Got My Number”. With Stefflon Don, Alma and Kash Doll, she performs the song “How It’s Done” which appears on the soundtrack of the film “Charlie’s Angels”. The latter is produced by Ariana Grande.

Kim Petras’ debut studio album, “Clarity”, was also released in 2019. She followed this with the release of the album “Turn Off The Light” (considered as “Turn Off The Light, Vol. 2”) including some songs from the self-titled EP album. The notoriety of Kim Petras allows him to make the cover of many magazines, including Notion and Galore.

16. Kim Petras was finally able to sign with a major label:

Kim Petras inaugurates the beginning of the year 2020 with the single “Reminds Me”. This one was remixed by The Kid Laroi and Juice Wrld: “Reminds Me Of You”. Then she prepares the release of a new studio album with the song “Malibu”. The latter gives him the opportunity to perform on the television show “Jimmy Kimmel Live!”. We find the German artist alongside Kygo for the title “Broken Glass”. She is also nominated for the Queerty Awards and the GLAAD Media Awards.

Between two tours, her collaboration project with Madison Beer materializes with “Villain”. In 2021, the single “Future Starts Now” sets up a possible “Turn Off The Light, Vol. 3” with “Hit It From The Back” and “Coconuts”.

Kim Petras continues to compose, write, and sing but can anything really top her “Unholy” song?