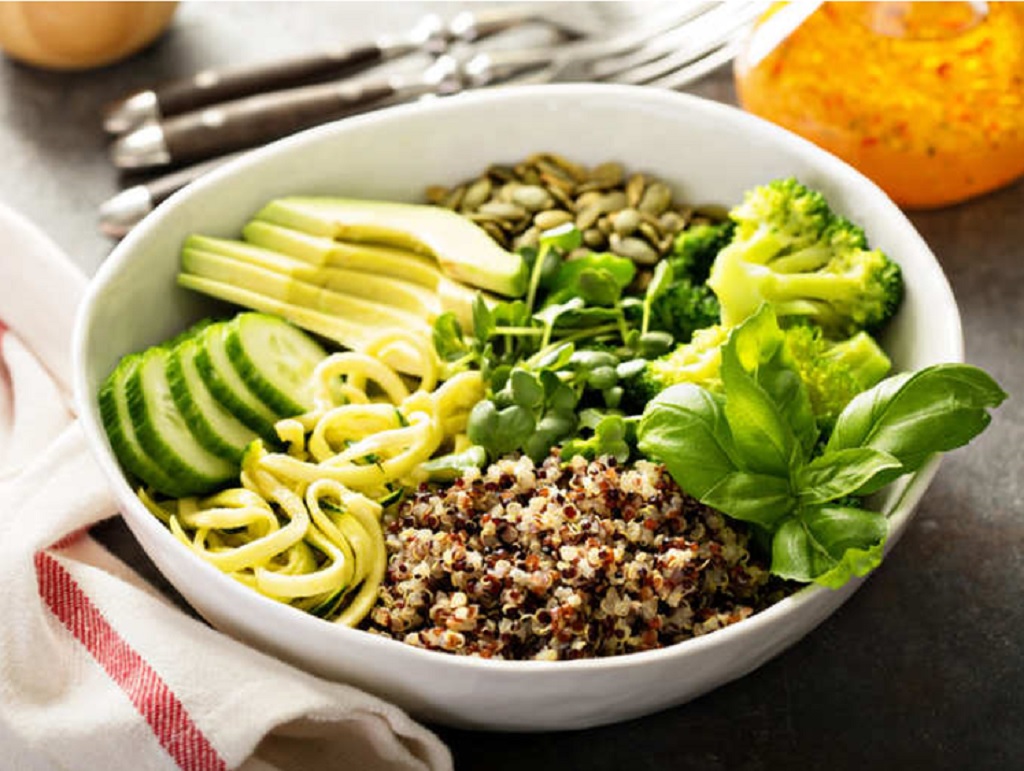 More recently, we have seen many people are considering being vegan instead of mere vegetarian. While vegetarian food has many health benefits such as high fibre content and presence of vitamin C, E and folic acids, a vegan diet contains less saturated fat and cholesterol besides more dietary fibre. This makes vegan’s thinner, have low blood pressure, and low heart disease. However, a vegan diet comes with few risks too such as certain nutritional deficiencies. In the following blog, we have listed the potential benefits of vegan diets and what type of risks you may face due to being vegan.

Benefits of a vegan diet

As we all know vegan diet is a completely plant-based diet which means, it is easier for us to load wide variety of legumes, fruits, grains and vegetables. A vegan diet is usually rich in fibre, vitamin C, folate, iron and magnesium besides low saturated fat and calories. When you eat rich plant-based food, your health also improves and chronic diseases risks decrease subsequently. Researchers found that a vegan diet can also reduce some cancers risks along with cardiometabolic related diseases.

To keep our mind and body healthy, we must develop a mindful eating habits. Mindful eating can be described as a practice in which we pay more attention to the food we eat and develop sensual awareness while intaking the meal. This means vegan people focus more on the intention behind eating rather than taste buds. This does not mean that they do not enjoy their food but vegans try to associate their food with health to make every meal contribute positively to their health. A mindful eating habit is developed automatically while planning meals or during food preparation.

Being vegan means being omnivorous that eliminates no food. In vegan diet, although many traditional foods are considered non-compliant, you still get a wider variety of food choices to be creative while selecting your meal. You can experiment with food that is vegan and you are unaware about to be more creative and diverse. Many food manufacturing companies are indeed making plant-based food for the growing vegan population that has traditional food taste but is vegan by core. For example, meatless burgers and dairy substitutes are made of soy like ingredients. Some of the alternative products are healthier than traditional food and at the same time, contains less calorie.

Vegan diet has become more popular mainly due to the weight loss properties the vegan diet has. Although being vegan alone does not mean you will lose weight but when combined with other lifestyle changes, it can bring a significant effect in less time. Even if you are unable to plan a weight loss program due to a busy schedule, a vegan lifestyle can help you a lot.

Being vegan can help you in curtailing food-related costs also. However, cost-saving further depends on which vegan food you choose to eat and what is offered in your place at the best prices. Undoubtedly seafood, meat and dairy products are costlier than plant-based food. Even some traditional and convenient food is costly too. This means, when you get rid of such food from your kitchen, your food costs reduce automatically.

Some people rather choose a vegan diet not because they want to curtail food-related costs or to reduce weight but because they feel being vegan is good for mother nature. The increased concern for the environment due to livestock farming and other food processing process have made environmentalists choose a vegan diet over traditional food. As compared to traditional food, vegan food does not require much processing and the farming of plants need little resources. Even dairy products require greenhouse gases which may add to global warming. Also, no animals are harmed to produce vegan food and hence animal cruelty is eliminated from the vegan diet.

Although a vegan diet is healthier than any other diet form, there are few potential nutritional deficiencies that vegans have to face. Vegan food usually lacks the calcium needed for bone formation and essential body functions. Therefore, it is suggested that vegans must intake calcium-rich food more such as pulses, green leafy vegetables and dried fruits. Calcium-fortified food like plant milk and cereal can also be considered.

Vegan food may lack Vitamin B-12 since they are usually found in animal-based food. This deficiency can lead to anaemic conditions. Under such conditions, vegans are prescribed to intake mushrooms, seaweed and fermented food besides B-complex vitamin supplements to balance their diet properly.  Another issue can be associated with protein but can be solved easily. Just eat lots of protein sources food that produces amino acids.

Other than this, Vitamin D related diets must also be taken care of by eating mushrooms and exposure to UV light. In some cases, you may be asked to take vitamin D supplements when needed. Lastly, vegans have to face a deficit in omega-3 fatty acids for healthy eyes and heart along with brain functioning. You can eat lots of walnuts, pumpkin, soy or chia seeds to increase omega-3 fatty acids in your body. Pregnant ladies and people suffering from acute conditions must consult health practitioners to ensure whether taking such supplements or being vegan is a good choice or not.

Being vegan means you will have a smaller number of food choices due to a strict dietary schedule. Certainly, if you choose to become vegan, you will have to remove many food types from your diet. Remember, vegan food not just eliminate animal food products only but also food that contains animal by-products. Many of the groceries, home recipes and restaurant food have these elements which you will need to skip.

Requires being health-conscious while having unrealistic expectations

People following a vegan diet have to become more health and food conscious since they have to maintain nutrients balance in their food. They have to read labels and food contents in processed food before intaking them to maintain a restricted food chart. Some of the food that contains animal by-products and needs to be eliminated includes honey, gelatine and whey which are non-vegan food. A vegan diet makes you expect more from your eating habits such as weight reduction. Although most vegans shed extra pounds instantly, few are unable to do so because of other health symptoms.

People following a vegan diet are usually scrutinised by family, friends and co-workers. Although a vegan diet is popular nowadays and plant-based food is easily available, you still might get challenged about your vegan lifestyle. You may feel isolated from social gatherings particularly in events such as fine dining or a party. Or else, you can party with those people who are vegan friendly and may join a vegan club.

So you’re considering going on birth control. Before you jump into any form of birth control, you want to do a bit of research....
Read more
Health & Fitness

Should You Switch From Coffee to a Wellness Tea?

Nothing compares to the refreshing aroma and taste of a freshly brewed cup of coffee, so should you switch from coffee to a wellness tea?...
Read more
Health & Fitness

Health is wealth- this is a saying we hear too often. We interact with the healthcare system every day for different reasons. Diseases like...
Read more