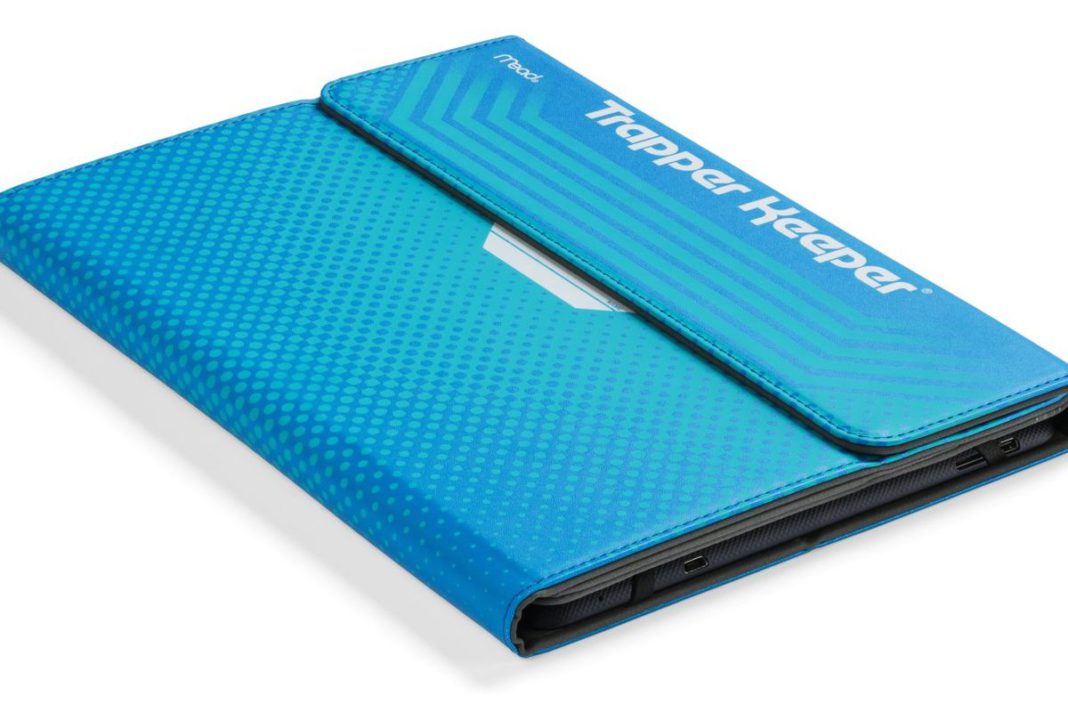 Marketing once again turns to the nostalgic markets and now it is the turn of Trapper Keeper, the brand of the most popular school folders from the late eighties and early nineties. They will return, but adapted to modern times, today the Trapper Keeper has come to be covers for iPad and Android tablets. In this article, we talk about what a Trapper Keeper is and how it came to be!

Trapper Keeper: How It Became The “It” Folder

What is a Trapper Keeper?

Nostalgia at the dawn of 80’s marketing is back! And those who wish to relive their young years of High School will be able to live again with a Trapper Keeper.

These folders were characterized by their large number of designs and a velcro clasp.

They were made by Mead, a company now associated with Kensington, a maker of tablet cases.

The Trapper Keeper is back!

For a few years there has been a trend for multinational brands and companies to appeal to the nostalgia of those who lived their childhood and adolescence in the eighties and nineties, such is the case of films like Transformers or Ninja Turtles that also seek to reach new generations. The new Trapper Keeper models adapted to the 21st century started going on sale for two sizes: for 8-inch tablets and for 10-inch devices at a price of $25 and $30 respectively.

Who invented the Trapper Keeper?

When E. Bryant Crutchfield (director of New Ventures at Mead) began test-marketing his new school notebook in 1978, he thought it would be useful to insert a feedback card into each one.

Kids who purchased the Trapper Keeper organizer noticed a slip that promised them a free binder if they mailed in their comments.  E. Bryant Crutchfield got 1500 cards with 1500 responses under the question: “Why did you purchase the Trapper Keeper rather than another type binder?”. Some said: “I heard it was good. My girlfriend had one.”

Others said: “My mother got it by mistake but I’d seen it on TV, so I decided to keep it.”

But the inventor’s favorite comment came from a 14-year-old named Fred.

Fred wrote that he had bought the Trapper Keeper instead of buying another binder to “keep all my shit, like papers and notes.”

“Kids that age are very open and honest,” Crutchfield recalled in laughter.

Launched in 1978 by Mead (now part of ACCO Brands), Trapper Keeper notebooks were a departure from the generic supplies that populated school lockers and desks.

Most people don’t know that more than 75 million Trapper Keepers have flown off store shelves! From the start, they were an enormous success. After their nationwide release, Mead (the company Crutchfield worked for) sold over $100 million of the folders and notebooks a year.

Why was the Trapper Keeper such a hit?

In the late 1970s, the people at Mead and Crutchfield were just looking for the next back-to-school item. As you can tell from the feedback card, inventor and marketing genius Crutchfield found success the old-fashioned way—through market research.

“[The Trapper Keeper] was no accident,” he stated in an interview with Mental Floss. “It was the most scientific and pragmatically planned product ever in that industry.”

In a sense, the Trapper Keeper became one of the few influential designs that represented the ideas, needs, and impressions of the masses.

One of the most enduring organizational products of all time

As director of New Ventures at Mead, part of Crutchfield’s job was to identify market trends

In 1972, Crutchfield conducted an analysis with someone at Harvard, showing there would be more students per classroom in the years to come. These children had  more classes, and had smaller lockers – basically their folders were increasing at 30 percent a year.

“You can’t take six 150-page notebooks around with you, and you can’t interchange them,” Crutchfield says. “People were using more portfolios, so I wanted to make a notebook that would hold portfolios, and they could take that to six classes.”

With his product named, and a prototype created, Crutchfield went to the next step: more focus group testing.

He and other Mead (now part of ACCO Brands) representatives went to schools with the Trappers and Trapper Keeper, talking to students and teachers to get feedback. A father of two, Crutchfield also looked for input a little closer to home, from his 13-year-old daughter and 15-year-old son: “I had access to what they were doing in school,” he says, “and I saw their lockers and talked to their teachers.”

For about a year, Crutchfield conducted focus groups, tweaking the design of the Trapper Keeper.

“There were probably five or six iterations,” he says. Crutchfield was happy with the result—a PVC binder with plastic, pinchless rings (the rings slid open to the side instead of snapping open). His binder also had a clip that held a pad and a pencil. His binder most importantly contained a flap held firmly closed by a snap.

And once this EXACT product was made, it was time to run a test market, which would help them determine if the product was truly viable.

This is how it became an American staple

The marketing company decided to market Trapper Keepers nationally in the summer of 1981. To prepare, Mead, who owned the brand created a prime-time network television campaign—not something one usually does for a school supply brand. The stationary company also ran ads in print featuring Mrs. Willard, a 9th grade teacher from Wellington, Kansas, who had recommended the Trapper Keeper to her students during the product’s run in the test market. In the ad, she praised all the benefits of using the Trapper Keeper by saying the following:

The Trapper Keepers folders came in three colors (blue, red, and green) and kids had six Trapper Keeper options consisting of three solid colors and three designs—soccer, dog and cat, and Oregon coast, which were basic 80s stock photos that Crutchfield bought from an agency.

“We rolled it out, and it was just like a rocket,” Crutchfield says. “It was the biggest thing we’d ever done. I saw kids fight over designs in retail.”

It grew so much, that it was forced to change

In 1988, Mead introduced the Trapper Keeper designer series—fashionable, funky, and sometimes psychedelic designs on the stationary binders and folders

The stationary company also made a deal with iconic characters like Garfield and Sonic the Hedgehog for the binders. Even Lamborghini got in on the action, granting its blessing (and licensing, ofcourse) to put some of its cars on the Trapper Keeper.

Of course, anything as popular as the Trapper Keeper will almost inevitably face a backlash—unexpectedly, the backlash didn’t come from students.

Creator and marketer, Crutchfield recalled that some teachers complained about the multiplication and conversion tables, which they said could help students cheat. “It was a controversy at one time,” he says. “One teacher said, ‘Hell, we can take the portfolios away from them while they’re doing their tests.’ Most of the teachers were very honest and said, ‘Anything that helps me pound it in their head is good.'”

If you say the words: Trapper Keepers to anyone who grew up in the 80s and 90s in America, you’ll inevitably hear from someone who desperately wanted one, but couldn’t have it because it was banned by their school. “The Trapper Keeper started to show up on some class lists as a ‘do not purchase’ because [teachers] didn’t like the noise of that Velcro,” Bartlett says. “[So] we switched from Velcro back to a snap.”

Though the controversy helped it become less popular after the mid-1990s, the Trapper Keeper has remained an important part of Mead’s back-to-school line of products—though it has undergone some modifications.

“The main change is that we went away from PVC, as most health-conscious companies are trying to do,” Bartlett says. “So it looks slightly different because it’s made out of polypropylene and sewn fabric, but the function is essentially the same.”

But the cool, psychedelic designs of the early 1990s aren’t as big a focus in the Trapper Keeper (other than for Gen Z who seem to be obsessed with all things 90s).

“Trapper has evolved a little bit to relying strongly on a color coding system of organization for students,” Bartlett says.

Finally the company revamped itself with a product relaunch in 2014, and added new Trapper Keeper designs, including Star Wars and Hello Kitty, in 2015.

In conclusion, now you know all about the Trapper Keeper legacy! Will you go out to buy one for your tablet? Let us know!

A trend that took Twitter by storm recently involved twitterati asking their unsuspecting friends to Google "What dinosaur has 500 teeth?" Have you been...
Read more
About

When you hear the word “chainsaw”, what comes to your mind? If you are a fan of horror movies, you might think of the...
Read more
About

We all love graham crackers. They are extremely versatile. It can be eaten directly, dipped in some sweetener, flavoured with cinnamon, or used as...
Read more

When is Jack Ryan Season 3 Coming Out?