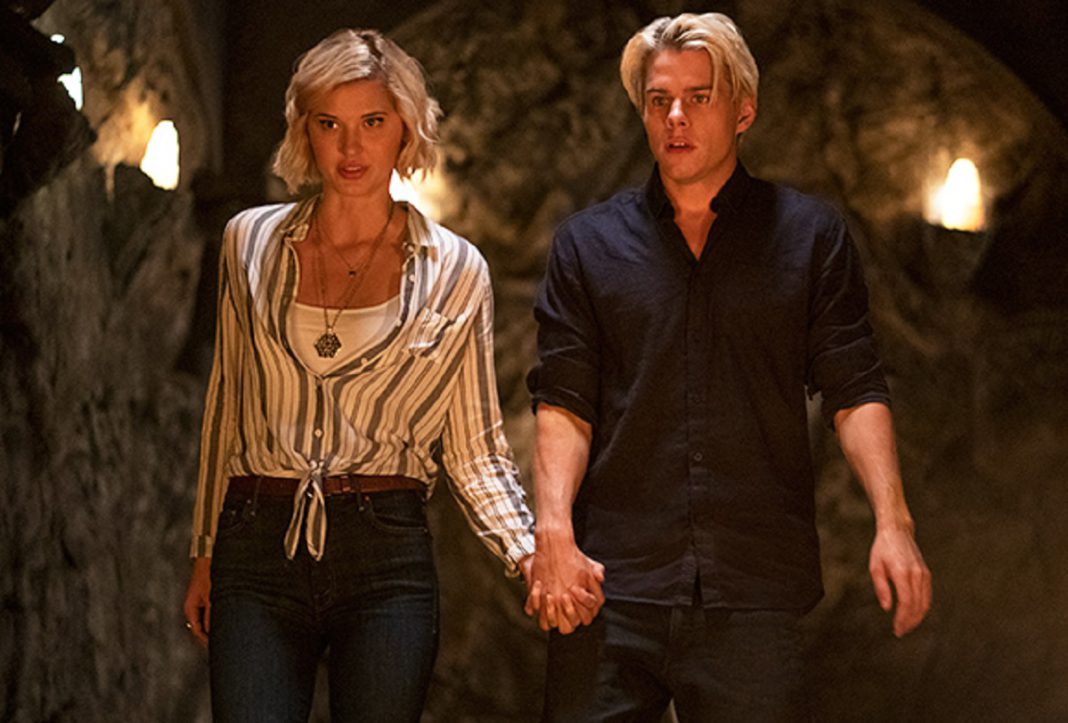 Created by a genius named Dennis Heaton, The Order is an American drama horror series produced by the production company Nomadic Pictures Entertainment, which is also responsible for series like Fargo or Van Helsing – very horror oriented indeed. As fans are already binge-watching the episodes on Netflix, the question remains: did the second season leave the door open for battles to be won and end at the end of season two, or will there be more of Jack, Alyssa and company? Variety confirmed the news that The Order season 3 would end after Dennis Heaton, (creator and producer of the series), announced that the series was not able to get through to a third season. “For two seasons, I had the honor of working with an incredible cast and crew on ‘The Order’ for Netflix,” he wrote. “Unfortunately we won’t be going back, but I will always treasure the memories and the props I stole.”

In this article, let’s take a look at why Netflix decided to cancel The Order series and if there is anything the fans can do to bring it back for the third time.

The Order Season 3 Creator Says Thankyou Instead Of Goodbye

The Order Season 3 creator had some choice words for his goodbye:

As we all know, the show’s creator was extremely grateful to have the show run for 2 seasons and for all the memories he made, but just one year after the cancellation was announced, it seems that the fan’s love and earnest demands for season 3 made him agitated enough to write this on his Twitter bio: “Canceling The Order wasn’t my decision.

Why was The Order Season 3 canceled by Netflix?

There is no specific reason for why Netflix chose not to renew The Order but we can assume that it must be down to viewership numbers not meeting expectations as quickly as Netflix hopes.

Although the true reason behind the cancellation remains unknown, 2 years ago in 2020, the streaming service seemed more cutthroat than usual with its approach to the future of shows, such as Atypical (which ended after four seasons), Dash and Lily (one season), V-Wars (after one season), Bonding (two seasons), Spinning Out (one season), and I Am Not Okay With This (one season).

As you can see with other victims of the Netflix cut-throat approach in 2020, many ended with just one season.

The Order Season 3: is there hope for fans?

It was quite clear that it was not visionary creator Heaton’s decision to cancel the show, much to fans’ relief as he even provided fans with would-be plot points and invoked a sense of hope for a remake of the story in the future (maybe as a film):

“PS – Jack was totally going to raise Alyssa from the dead, but she was going to come back wrong. Like, Pet Sematary wrong,” he added. “Probably possessed by Zecchia. And a whole bunch of other corpses were coming back with her.”

Perhaps an ancient dark magic spell will encourage Netflix to reconsider bringing back The Order for the third time but if the spell will work successfully, will depend on the success of other fan projects which Heaton is encouraging as well.

As the fan base, fan community, and fan works such as fanfiction continue to grow, we could hopefully see The Order season 3 continue if the demand exceeds everything!

Interesting Facts About The Order Season 3

To avenge his mother’s alleged suicide, college student Jack Morton joins the secret society Hermetic Order of the Blue Rose, which teaches and practices magic. As Jack delves deeper into the organization’s history, he uncovers dark family secrets and an underground struggle between werewolves and dark magic.

Created by Dennis Heaton, he was also involved in the production and script:

His fantasy and horror television series The Order ran for twenty episodes approximately between March 7, 2019 and June 18, 2020 on Netflix.

Before the show even premiered, it got picked up on April 17, 2018, as it was announced that Netflix had ordered the series to produce a first season consisting of ten episodes.

The Order series was also created by Shelley Eriksen:

The Order season 1 received positive reviews upon its release:

On April 17, 2018, it was announced that Netflix had ordered the production of a ten-episode first season. Alongside the initial series announcement, it was confirmed that Jake Manley, Sarah Gray, Matt Frewer, Sam Trammell, and Max Martini have been cast as series regulars.

In terms of reviews from sites like Rotten Tomatoes, the first season has a 100% approval rating with an average rating of 7.50/10, based on 6 reviews – this also adds proof to the fact that season 1 was probably ranked as the best.

Did The Order season 2 flop?

Season 2 of The Order premiered on Netflix picking up right where season 1 left off, with the Knights on a mission to regain their memories of the Order. But it would all be simpler if there were no deadly magicians, cults and demons available to stop them.

The Order premiered its second season with a considerable difference from the first season: the series premiered in March 2019, and the second year premiered in June 2020. Considering that scenario, the yearly gap was enough for pre-covid writing tables and editing teams. It could be that the Pandemic made the process of creativity extremely strenuous for the team, and Netflix had the final say.

The second season starts right after the end of the first season. After having their memories erased by the Order, the Knights scramble to get them back. They also hatch a plan to exact revenge on their enemies, but things go awry as they are forced to face ravenous magicians, deadly cults and bloodthirsty demons.

In the end, Alyssa is branded a terrorist because of Salvadore Grant. Midnight and Silverback engage in an all-out war to get Jack as champion, and the latter wins.

With Jack at Silverback, Gabrielle is marked as the new champion of Midnight. She transforms into a werewolf and likely kills Alyssa, causing Vera to lose her magic. Councilwoman Kepler is sacrificed by Randall to bring Lilith Bathory back from the demonic realm. Randall succeeds in his mission, but Lilith returns as a demon.

In Season 3, we could expect to witness the fallout from the Season 2 finale. Although Alyssa appears dead, there is a high possibility that Jack will do everything possible to bring her back. Or maybe she is alive and unconscious?

As Vera has apparently lost her magic, Jack and Alyssa (if she is alive) may have to work together to get it back. They may also have to deal with the wrath of the Order and Midnight. It will also show Jack and Alyssa dealing with the side effects of using the most powerful enchantment, The Vade Maecum. As Lilith is now a demon, she may have to choose between becoming a human again or being a demon forever.

What is the Netflix series The Order about?

Jack Morton, a freshman at Belgrave University, decides to join the ​​secret society called The Order, a legendary secret society of which his father appears to be a part.

As Jack digs deeper, drawn into a world of magic, monsters and intrigue he uncovers more dark family secrets and an underground battle between werewolves and the dark magical arts.

He wants revenge on his father with his grandfather because he would be responsible for the death of his mother. However, the Order happens to be a secret society that studies and teaches magic. Jack must pass many testing moments alongside other neophytes before he can be accepted. However a creature kills the neophytes. With the help of the young Alyssa Drake, he will try to find this creature and come up against what seem to be werewolves.

Will there be season 3 of the Order?

Netflix canceled the horror series “The Order ” after two seasons, in which the attraction formed passionate fans.

Why did Netflix cancel The Order?

As always, the audience, which is rarely revealed by the platform, was indicated as what led to the cancellation. However, the website What’s On Netflix, which is not linked to the platform, said that the pandemic of the coronavirus (COVID-19) hampered the continuity of the series.

However, fans should be surprised by the shocking season finale. In the episode New World Order – Part 2, Alyssa (Sarah Gray) is killed by Gabrielle (Louriza Tronco), but all is not lost. The last image of the season is Jack (Jake Manley) carrying the body of his beloved, along with a book of magic in his hands.

Why was Lilith kicked out of the Order?

Lilith was a member of the second order and Alyssa, she was very skilled. When she regains her memory she helps the Werewolves a lot with magic. As soon as she was promoted to order, it stole her memory and expelled her, fate caused Lilith to join the Knights of Saint Kitts and become a werewolf.

Who is the villain of season two of The Order?

Jack’s father is the organization’s Gran Mage and reveals himself to be the great villain of the story. Jack was summoned to the order, but he was also chosen by a wolfskin from a former knight. In the story, wolves and wizards are mortal enemies.

Is the cast of The Order season 3 confirmed?

Except a few, all of the main cast members can reprise their roles in Season 3. The third season could also introduce some new additions to the main cast. While the fate of Sarah Gray’s character remains uncertain, she may return to reprise her role in season three.