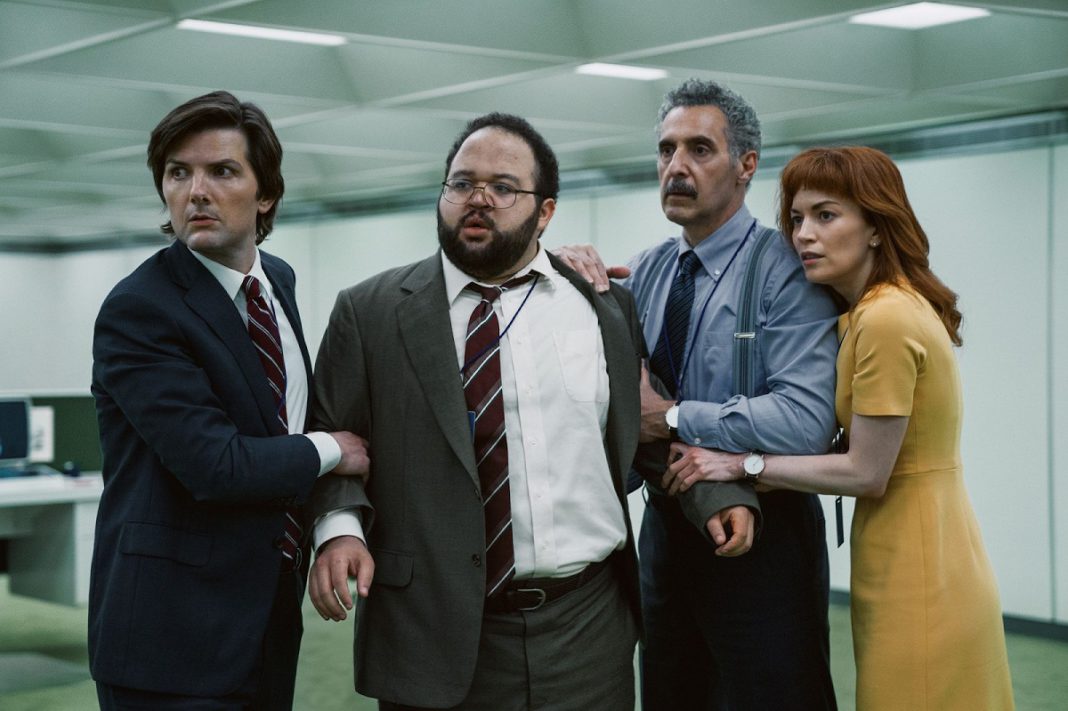 Severance is an American science fiction psychological thriller television series created by Dan Erickson and directed by Ben Stiller and Ifa McArdle. The series is about to come out with Severance Season 2 soon and it will once again star Adam Scott, Zach Cherry, Britt Lauer, Tramell Tillman, Jan Tulloch, Dichen Luckman, Michael Chernus, John Turturro, Christopher Walken, and Patricia Arquette. The plot follows Mark, an employee at Lumon Industries, who agrees to a “separation” procedure in which his non-work memories are separated from his work memories. The series premiered on Apple TV on February 18, 2022, and almost immediately critics and audiences praised the cinematography! Not only that, many people worshiped the production design, music, story, and acting (especially the lead actor Scott). At the 74th Primetime Emmy Awards, the series received 14 nominations, including Outstanding Drama Series and acting categories for Scott, Turturro, Walken, and Arquette. No wonder Apple TV is committed to bringing us a second season!

Severance Season 2: Read This While You Wait Till June 2023!

When will Severance Season 2 come out?

The Severance series was renewed for a second season In April 2022.

After premiering its first part in February 2022, Apple TV+ confirmed that it has greenlit a second season of “Severance”, the acclaimed thriller created and written by Dan Erickson, and directed by Ben Stiller (The Secret Life of Walter Mitty) and Aoife Mccardle.

“It’s really exciting to see the response from people who are loving the series, and the level of enthusiasm from fans,” Stiller said in a statement. “ It’s been a long road to bring ‘Severance’ to television. Initially, I read Dan’s pilot over five years ago. It has always been a story meant for several seasons, and I am very happy that we can continue it, ”he added.

What to expect from Severance Season 2?

On April 6, 2022, Apple gave the green light for the second season.

Its first season consists of a total of nine episodes, each lasting about an hour which means that we can expect the same amount of duration but the number of episodes in Season 2 might remain at 9, or even go down.

Apple also confirmed that it would be commissioning Dan Erickson, the creator of Severance, for another season as well. As Stiller pointed out, Severance was always a multi-series show. To tell the story properly and develop the character arcs, the producers and writers will probably need five to six seasons; the potential reach of the program is enormous.

What is Severance Season 1 about?

In Severance, Mark Scout (Adam Scott) is the head of a work team at the mysterious Lumon Industries, whose employees have undergone a surgical procedure that separates their memories between work and personal life. This risky experiment in “work-life balance” is thrown into question when Mark finds himself at the center of a mystery that will force him to confront the true nature of his work…and himself.

Fun Facts About The Severance Series:

Reception wise, Severance was met with critical acclaim upon its release:

On the review aggregator website Rotten Tomatoes, 97% of 72 reviews from critics are positive, with an average rating of 8.5/10. The site’s consensus reads: “Audacious, mysterious, and bringing fresh insight into the perils of corporate drudgery, Severance is the complete package.”

In addition, Metacritic, which uses a weighted average, assigned a score of 83 out of 100 based on out of 30 critics, indicating “universal acclaim”.

The show was initially called Tumwater:

Filming for the series began in October 2020 in New York City under the working title Tumwater. But by the time filming ended on June 23, 2021, the now famous title of Severance was given!

Ben Stiller read the pilot episode script approximately five years before the series premiered, calling it “the longest thing I’ve ever worked on”. The script was sent by Dan Erickson as a sample to Stiller’s production company, Red Hour Productions, and was forwarded to Stiller through development executive Jackie Cohn. Stiller said he liked the story’s contributions to workplace comedy so much so that Stiller invited Adam Scott to join the show. Two years later in November 2019, Apple TV+ placed production orders on Severance, with Stiller directing and Scott in the lead role.

Stiller was hired to direct only the pilot episode, however he decided to direct several more episodes as the series went into development.

Artistic influences for the series come from darker comedies:

If you watched the first season of Severance, you’ll know that the direction, the acting, and the characters, all had a sense of dread and doom. Suffice to say that a wide variety of modern media influenced Severance including the creepypasta known as The Backrooms, the video game The Stanley Parable, and films such as Brazil, The Truman Show, and Eternal Sunshine of the Spotless Mind; as well as Dilbert’s comic strips. Some older influences include the existential hell present in Jean-Paul Sartre’s play Between Four Walls and the totalitarian dystopia depicted in George Orwell’s 1984 novel.

I’m not going to drop any spoilers here in case you haven’t seen it, suffice it to say that Severance is kind of a sci-fi/psychological thriller with Charlie Kaufman touches.

Putting together the now famous cast of Severance:

In January 2020, a star set of actors including Patricia Arquette, Britt Lower, Jen Tullock, and Zach Cherry were announced to be cast. Tramell Tillman’s joining was announced in February 2020, and John Turturro and Christopher Walken were added in November 2020.

Dichen Lachman was cast in December 2020. Turturro said he recommended Walken for the role of Burt because he had known him “for a long time and I don’t really need to act like we’re friends”.

The first installment left the followers of the story in such suspense that it seems that more characters could be presented to clarify everything seen so far. Still, to date, it is only a fact that the four main characters, Mark (Adam Scott), Helly (Britt Lower), Irving ( John Turturro ), and Dylan (Zach Cherry), will return in the next season, while the director from the office, Mrs. Cobel (Patricia Arquette) and Milchek (Tramell Tillman) will do the same.