Record of Ragnarok Season 2: Read This While You Wait (Character Study and Season 1 Fun Facts) 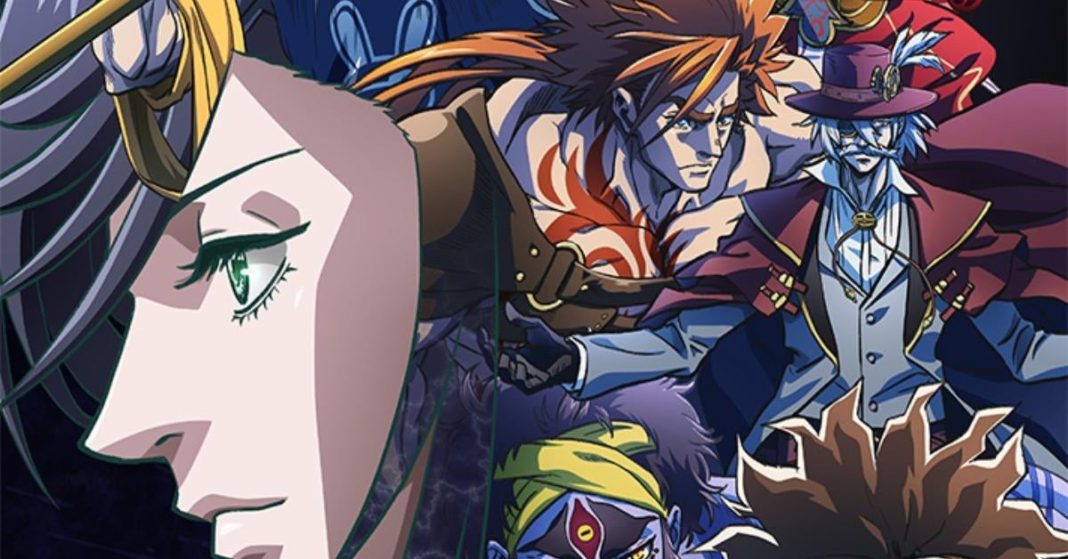 What can I read while I wait for the Record of Ragnarok Season 2?

Additionally, a spin-off under the title Shūmatsu no Valkyrie: The Legend of Lü Bu Fengxian began its serialization on October 21, magazine Gekkan Comic Zenon, being compiled into six tankōbon volumes to date.

Lastly, you can re-watch season 1 of Record of Ragnarok released on June 17, 2021 via Netflix, where the anime adaptation by Graphinica will get you in the mood for Season 2.

Record of Ragnarok Season 2: When will it be released on Netflix?

In June 2023, Record of Ragnarok Season 2 can be surely found on Netflix. While you’ll have to wait for almost a year for Season 2, catch up with Season 1 of the anime that initially premiered on Netflix in June 2021.

“The second season of the anime, “Record of Ragnarok II,” will be exclusively distributed on Netflix in 2023!

Brynhildr is on the left, and Reifuku, Buddha, Heracles, Jack the Ripper, Shiva, and Raiden Tameemon are on the right.

From the visuals of the new characters that will appear in the second period, it is a key visual that you can feel the development of the story”.

Click on the link below to enjoy the teaser for Record of Ragnarok Season 2 while you wait till next year for the whole series to come out. This trailer was just recently released in July.

The official Twitter account of Netflix’s ‘anime’ adaptation of the ‘manga’ Shūmatsu no Valkyrie ( Record of Ragnarok ) has shared a new promotional image of season 2.

1) when season 2 of Record of Ragnarok will come out,

In Record of Ragnarok Season 1,  we saw that things did not look good for humans until Kojiro Saski steps up in round three because this was the round where humanity saw a glimmer of breath-taking hope after Japanese swordsman Kojiro Saski defeated the god of the sea, Poseidon.

As one can imagine, Record of Ragnarok Season 2 will begin with the fourth round where the god Hercules will battle face to face with one of the most infamous serial killers in history, Jack the Ripper. The next round is expecting Japanese sumo wrestler Raiden Tameemon and Shiva, the third god in the Hindu triumvirate to come face to face with each other in the 5th round of the deadly battle. Then,  following suit in round 6 will be Buddha and God of Misfortune Zerofuku.

It has been predicted that the second season will still follow closely with the manga’s story thanks to the notes from the director Masao Ōkubo who said that he always makes sure that the anime does not shift too far from the original manga.

“I always had those who never read the manga in my mind when I composed the anime,” the director said.

“I made sure the anime didn’t go off track from the original manga. As I mentioned before, I tried to include things that I was most excited about when reading the manga and leave them untouched. I was always conscious of making the anime as close to the manga as possible.”

”I was able to do pretty much what I wanted because the authors understood manga and anime have different ways of expressing the same scenes,” he added.

“As the original manga has too many lines (as in literal lines, not text & character dialogues), it would’ve been impossible to animate just like it. I tried to reduce as many lines as possible but I still received complaints from the staff later on… I learned my lesson.”

Jack the Ripper: Anime vs Original

Unlike the historical figure, Record of Ragnarok offers an origin story to Jack. In the work of Takumi Fukui, Shinya Umemura and Chika Aji, the individual who would be called “Jack the Ripper” was the son of a prostitute. Since his birth, he had the power to see the emotions of others as colors thanks to his right eye. A series of events would lead to him ending up murdering his parents. Years later, he would start his reign of terror.

Who was the real Jack the Ripper?

The individual known as “Jack the Ripper”, the most famous serial killer in history, was never identified or caught. The only thing that is certain is that, between August 31 and November 9, 1888, five prostitutes were murdered around the Whitechapel district of London. Although these murders have been accepted as the work of the same individual due to their brutal and precise ‘modus operandi’, there are researchers who suggest that eleven subsequent ones – which took place between 1888 and 1891 – were also the work of Jack.

In Record of Ragnarok, she is characterized as an aggressive, picky, and arrogant young woman.

Who was the real Hlokk?

Like her previous three sisters, Hlökk is referred to as a valkyrie in the Poetic Edda poems Grímnismál and Nafnaþulur. Nothing else is known about Hlökk, but we know that his character’s name can mean “Noise” or “Battle”.

Unlike the character presented in Shūmatsu no Valkyrie ( Record of Ragnarok ), who gained powers after drinking the Ambrosia, ancient myths relate that Hercules gained his superhuman strength after drinking the breast milk of Hera, who had previously tried to assassinate him upon discovering the Ambrosia. Zeus’ infidelity. In fact, this goddess antagonized Hercules for his entire life. This can be seen in the myth of The Twelve Labors of Hercules.

In a fit of madness provoked by Hera, Hercules murders his first wife (Megara) and their children. Repentant and in search of redemption, Hercules goes to the Oracle of Delphi. Under Hera’s control, he reveals that he must overcome twelve labors for his sin to be forgiven. In Record of Ragnarok, these are referenced in the hero’s abilities.

After completing them, Hercules would marry the princess Iole and star in other adventures.

Who was the real Hercules?

Son of the mortal Alcmene and the god Zeus, Hercules is one of the most iconic heroes in Greek mythology.

Setting aside the dramatization of his motive for sumo, Record of Ragnarok fairly faithfully portrays Raiden Tameemon’s biography. Blessed with a great physique—he is known to have been almost 2 meters tall—and an aptitude for sports, Raiden was invited by Urakaze Kazuki to Edo (Tokyo) and became a trainee under ‘yokozuna’ Tanikaze Kajinosuke.

Who was the real Raiden Tameemon?

Born in 1767 in Tōmi, Nagano Prefecture, Raiden Tameemon was one of the most legendary sumo wrestlers in Japanese history. Although he was never promoted to ‘yokozuna’, he holds the best winning record in the discipline: 254 wins and only 10 losses.Following his successful career, Raiden retired from sumo in 1811 and became director of the sumo association in Izumo Province, Shimane Prefecture. He passed away on February 11, 1825.

In Record of Ragnarok, she is characterized as a tough woman, albeit somewhat insecure due to her muscular physical appearance.

Who was the real Þrúðr?

Like her sisters, Þrúðr is referred to as a valkyrie in the Poetic Edda poems Grímnismál and Nafnaþulur. Nothing else is known about Þrúðr but we do know that his character’s name can mean “Strength” or “Power”.

Within the Trimurti —the three fundamental forms or aspects of the universe, according to Hinduism—, Shiva represents destruction and regeneration. Like the etymology of his name, this deity has multiple representations. While some portray him as a benevolent household god, others portray him as a fierce warrior. This duality is portrayed in his generally laid back character, but prone to outbursts of rage and other emotions in Shūmatsu no Valkyrie ( Record of Ragnarok ).

Who was the real Shiva?

In reality, Shiva is an amalgamation of deities belonging to and prior to Vedism. Among these are Agni, Indra, and Rudra. In the works of Takumi Fukui, Shinya Umemura, and Chika Aji, these gods are portrayed as friends of Shiva on his journey to the top of Svarga.

Although Shūmatsu no Valkyrie ( Record of Ragnarok ) faithfully portrays various aspects of the historical figure, such as his aristocratic origins and subsequent renunciation to become a hermit, Takumi Fukui and Shinya Umemura modified the circumstances behind his enlightenment. Additionally, they made him a more hedonistic character.

Who was the real Buddha?

Born into an aristocratic family in the late Republic of Sakia between 563 and 483 BC. C, Siddhārtha Gautama gave up his life of luxury to become a hermit. After several years of begging, meditation and asceticism, he experienced a spiritual awakening about the cause of suffering and how to stop Samsara: the cycle of birth, life, death and incarnation. With this knowledge, he traveled the Indo-Gangetic plain teaching and building a religious community that would establish the foundations of Buddhism. Centuries after his death (483-368 BC), his followers called him “Buddha”: The Awakened or Enlightened One.

Unlike other gods in Record of Ragnarok, Zerofuku is a completely fictional deity created by Takumi Fukui, Shinya Umemura, and Chika Aji. He is a product of the fusion of the Seven Gods of Fortune and the true opponent of Buddha in round 6 of Ragnarok.

Who was the real Zerofuku?

Originally, he was a kind god determined to bring happiness to mankind by absorbing their bad luck. However, he slowly realized his depraved nature. As if that wasn’t enough, he witnessed how Buddha did a better job of bringing happiness to humanity. This sparked envy of the Buddha and a growing desire to wipe out humans.

In an effort to calm his anger, Zerofuku split into the Seven Gods of Fortune.

In this anime, we see Japanese influences that don’t stray away from the origins.

Who were the real Seven Gods of Fortune?

Bishamonten, Hotei, Jurōjin, Fukurokuju, Bishamonten, Benzaiten, Daikokuten, and Ebisu are the Gods of Fortune in Japanese folklore. Each represents different aspects of good luck. For example, Bishamonten is the patron saint of good luck in wars. With the exception of Ebisu, these deities have their origins outside of Japan. Benzaiten, Bishamonten, Daikokuten come from Hinduism; Fukurokuju, Hotei and Jurojin, from Buddhism and Taoism. However, they have all been adopted and canonized in Japanese culture.