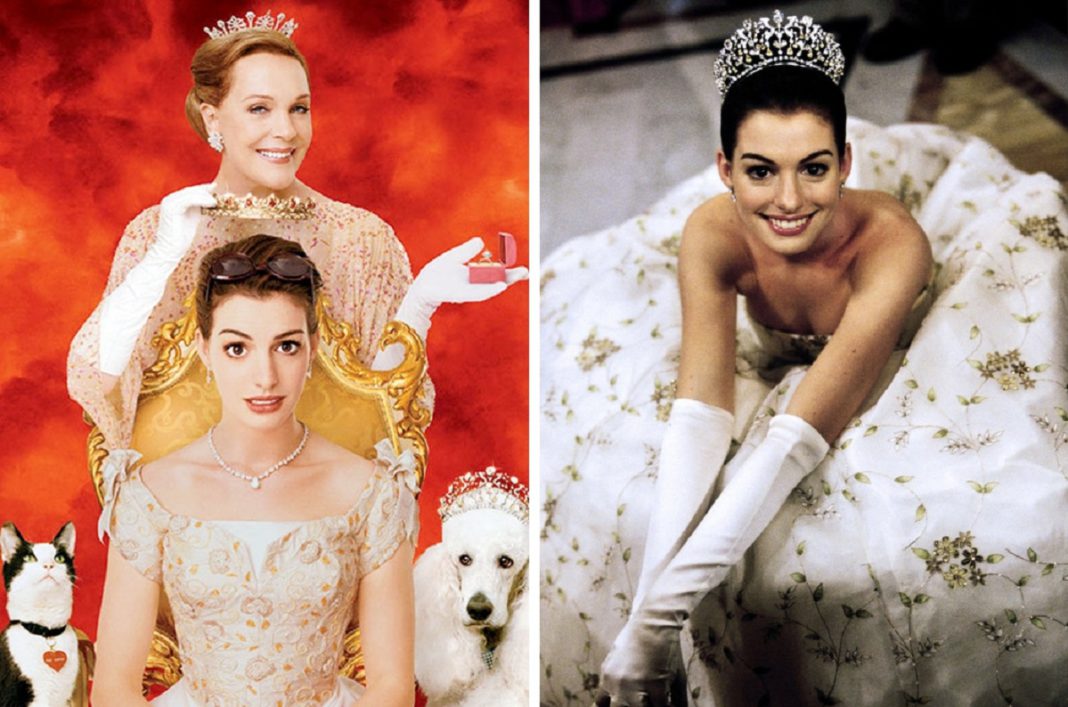 It’s already not easy to be both a high school student in New York and the crown princess of the principality of Genovia. Now, moreover, Mia is in love with her best friend’s brother, Michael, who doesn’t seem to be interested in her at all…What to do? To despair, to pretend to be interested in Kenny to make Michael jealous? Can she quit everything? No, a Princess never gives up! But this is a fairytale wish, as the reality is that Julie Andrews has confirmed that Princess Diaries 3 won’t be happening, saying: “too far down the line now to go back to it”. For more details keep reading!

A 2019 promise from Anne Hathaway:

Back in 2019, Anne Hathaway brought a huge smile to the faces of everyone when she confirmed the script for Princess Diaries 3. The Walt Disney saga immersed us in the life of an introverted and clumsy teenager who learns that she is a princess. The first film was released in 2001 and the sequel in 2004.

In a TV interview on Thursday, Anne Hathaway answered a fan who asked her if a third feature film was in the plans, and the famous actress replied: “ There is a script for a third film. I want to do it, Julie Andrews wants to do it, Deborah Martin Chase, our producer, wants to do it. We all really want this to happen”.

The news even came out that according to Anne Hathaway, The Princess Diaries 3 script was complete. Hathaway said she wanted to direct this movie and that Julie Andrews and producer Debra Martin Chase are on her side.

As of 2022, 19 years have passed since the release of the last film in the franchise. Fans are bound to hope that a 3rd installment will happen at some given time. It was announced in 2015 that the film was moving forward, but the news has been pretty muted so far.

In a new interview, Anne Hathaway spoke excitedly, but cautiously, about the future, warning that The Princess’s Diaries 3 is going to take a little longer to get off the ground and won’t magically be in production next week. The film launched Hathaway’s career, so it holds a special place in her heart. Ultimately, even though there is a script, it seems like some fine tweaking needs to be done before anything can officially transform. Hathaway explains.

“It’s as important to us as it is to you, and we don’t want to deliver anything until it’s ready, but we’re working on it. We just want it to be really perfect because we love this story as much as you love it”.

That there was an interest in making a third edition of the movie based on her young adult series Princess Diaries, which she wrote. As we all know it was later adapted by Walt Disney Pictures into two feature films.

One of the Princess Diaries’ leading ladies has sealed the fate of all fans with the words: “It’s not happening”. For an interview about a lifetime achievement, she told the Hollywood Reporter: “I think it would be too late to do it now”.

2001 Princess Diaries was directed by Garry Marshall from a screenplay written by Gina Wendkos and is based on the book of the same name by Meg Cabot. The film was a smash hit and spawned a hugely successful sequel in 2004.

With Marshall passing away in 2016, the project will need to find another director. Cabot has said in the past that the 3rd film is a tribute to the late director. With the return of everyone, it seems that this tribute will finally be made in the near future.

19 years is a long time to wait, and Julie Andrews feels that director Garry Marshall was a crucial part of the production, saying: “There was talk of a sequel but then Garry did leave us”.

Clearly, Director Marshall needed this to happen in 2016. He revealed to People that the film could be set in Manhattan depending on Anne Hathaway’s accessibility. Tragically, Marshall died a few months later. Fans will always know the director’s boundless work in the first two rom-coms, and his endorsement of another has a significant effect.

Other FAQs about Princess Diaries 3:

What will The Princess Diaries 3 be about?

Telling the story of a teenager who discovers that she is the successor to a European empire, the film was an undeniable asset for the young Anne Hathaway and was a huge success in cinema. The Princess Diaries 3 was extended to scriptwriters and completed as confirmed by Anne Hathaway herself on Andy Cohen, which aroused the enthusiasm of the public.

When we last saw Mia Thermopolis, she had been delegated to the Queen of Genovia. But what’s next for her? Did she and Nicholas stay together? We can’t really tell but the story will pick up right where it left off.

What will be the plot for Princess Diaries 3?

Inspired by Meg Cabot’s book of the same name, the Princess Diaries changed from the books a lot.

The film, in particular, takes the story down a total path because for The Princess Diaries 3, Garry Marshall had a plot high on his priority list which was to bring Queen Mia to Manhattan.

As a thank you, the directors might choose to stick with his methodology and open up another part for the characters in America. Whether or not they turn to books for motivation, they have a ton of material at their disposal since the original author of the book Cabot has composed many long-running spin-offs.

Who was expected to return for Princess Diaries 3?

A slew of The Princess Diaries cast members have revealed they wanted to return for the third film.

Anne Hathaway and Julie Andrews said they would return but then the Sound Of Music actress later felt it was too late.

“Because she was the bully at school. I might like to see life bring it back to ground zero for her and be a little more modest. I would be in.”

Back in 2016, Chris Pine discussed returning to the role of Nicholas after a fan learned about the chances of a comeback during a Q&A. “Have you scanned my diary??” he had answered.

Will Princess Diaries 3 return? Will it be good?

If the third movie was to be, it’s sure to make the whole thing a Disney trilogy as the mystery of Mia’s future would be over. Princess Diaries 3 would give the princess-turned-ruler a reasonable beginning, middle, and end, though it contrasts incredibly with Meg Cabot’s composition.

Fortunately, the demand for The Princess Diaries 3 has just spread following Meghan Markle’s marriage to Prince Harry. If the presence of royalty related content motivates certainty, it is anything but an assurance that the film will be made. Despite all the talk about the third movie, it hasn’t really been affirmed by Disney. Whether or not the venture gets the green light, bringing the cast together, all of whom have in the meantime uncovered incredible accomplishments and busy schedules, would be a task in itself.

All things considered, ‘The Princess Diaries 3′ is definitely not on Julie Andrews’ mind and with her age in consideration, this second edition looks more likely to be the last.