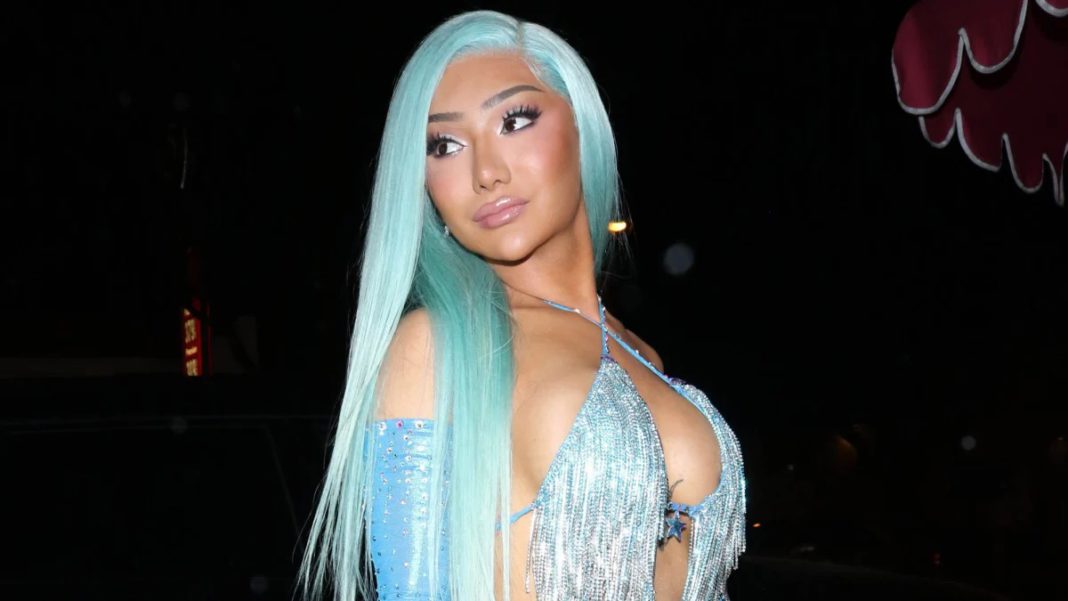 Popular influencer Nikita Dragun has been arrested for felony assault after walking around a hotel in Miami naked. Nikita Dragun is a popular influencer, best known for her beauty-related YouTube content. The 26-year-old social media star was arrested at a Miami hotel after walking around the pool naked and causing a disturbance. Law enforcement said Nikita refused to calm down and escalated the situation further by throwing water at hotel staff, before going to her room, where she played music for everyone to hear. Once the police arrived, she hit one of the guards with a bottle of water. Guess she didn’t know it wasn’t smart to piss off the police, because it resulted in an arrest. If Nikita Dragun hadn’t been such a bitch, they would have let her go with a warning. Currently, it appears Nikita is being held at Turner Guilford Knight Correctional Facility in Miami-Dade County on a $5,000 bond. I guess that’s an amount the popular influencer could easily afford, but the real issue here is that Nikita is being placed in a men’s unit because she’s a trans woman. This sparks a whole other debate, because clearly if she pays her way through crimes or goes to a female jail, will she ever be afraid of committing crimes again and again? Let’s find out what exactly happened to Nikita Dragun.

Influencer Nikita Dragun Bares It All, Goes Straight To Jail

Will a trans celebrity who leans feminine be safe in a male prison?

Nikita Dragun, a transgender influencer who identifies as female has been placed in a men’s prison, which her lawyer called “extremely disturbing and dangerous”. On the other hand, in a female prison, Nikita will make the whole place her stage and feel more at home as opposed to the friction she will face in a men’s prison. In fact, there could be instances that could involve rape. As much of a brat as she is, if her sentence is not for a week, she could land herself in some really harsh situations.

“This decision directly violates the Miami-Dade County Department of Corrections protocol, which states that transgender inmates are categorized and housed based on security needs and gender identity”, Jack Ketsoyan said in a statement.

Despite the complaints, Dragun’s arrest affidavit lists her as asking to be recognized as a man, according to NBC News. It also said she used male pronouns ‘he’ and ‘him’ – despite having used female pronouns for several years. Dragun’s prison profile, despite her legal status as female, lists her as male.

She was able to stream live from bail:

The now young woman who was born male asks Judge Mindy Glazer for her transfer.

But the Florida judge has told transgender influencer Nikkita Dragun she should stay in the men’s correctional unit where she was being held after she was arrested.

Glazer said she couldn’t accommodate the request, noting “I don’t make the rules,” before saying the prison should have placed Drugan in a separate area inside the unit.

It is unknown if Dragun was placed in a separate area.

At the end of the hearing, the influencer gave the camera a kiss as Dragun broadcast remotely using her fame to the maximum.

Why was Nikita Dragun arrested?

She was arrested and charged with assault and battery against a police officer.

Nikita Dragun, 26, was arrested Monday at a Miami hotel for ‘causing a disturbance’ and was ‘extremely disorderly’, including ‘walking around the pool with no clothes on’, according to the arrest affidavit obtained.

When police and hotel security arrived at Dragun’s room, loud music could be heard inside, police said.

She opened the door and was told by hotel security that she would be escorted off the property.

Dragun then closed the door in his face, then opened it again and asked security, “Do you want more?” She then allegedly swung a bottle of water at them, “causing the water to hit and spill” at the guard and one of the officers, according to the affidavit.

Dragun was arrested for assault, as well as assault and battery for misdemeanor and disorderly conduct, and taken to Miami-Dade Turner Guilford Knight Correctional Center – a medium-security prison that houses male offenders.

So is Nikita Dragun going to jail?

Dragun has since been released and “is now safe”, according to the makeup influencers rep, but that hasn’t stopped him from blowing up the system. She was released on bail but her arraignment hearing is scheduled for December 7.

In March 2017, the company Jeffree Star Cosmetics was accused of blackface for the distribution of promotional photos in which Nikita Dragun appeared covered in metallic bronze pigments which darkened her complexion markedly. The makeup “guru” was subsequently criticized on several occasions for the practice of “blackfishing” for her use of tanning spray.

She also caused a minor scandal in 2019 after accusing Michael Yerger, whom she introduced in 2018 as her boyfriend, of cheating on her. Yerger, a reality TV actor, said on Instagram that they never had a personal relationship and that she hired him as a model and comedian.

Is Nikita Dragun a boy or a girl?

As a young child, Nikita Dragun who was born in Belgium and raised in Virginia and assigned as a boy, realizes that she is different from other children and thinks she will be a princess.

In kindergarten, a teacher who catches her wearing girl’s clothes contacts her parents. So she withdraws into herself. She stops wearing girls’ clothes and behaving like one, knowing that she might be a victim of harassment. From high school, she hides her true nature less and less.

In college, Dragun begins to develop her trans identity, even going so far as obtaining a false identity card with the name of Nicole, and starts frequenting the bars and the clubs of Washington DC where one considers her as a woman. She created her YouTube channel in February 2013 and adopts the name “Nikita Dragun” in reference to the character of the television series Nikita, whose actress is, like her, of Asian origin and because of being harassed because of her origins at school, she was told sometimes she looked like a dragon.

When did Nikita Dragun come out as trans?

In December 2015, she came out as transgender on her Youtube channel. She then put many videos online on the subject of her transition and the problems of trans identity: “I started to be honest and to document my journey, it was really out of frustration. I wanted to transition, I had all these questions and couldn’t find answers anywhere online”.

She is considered a youth icon for transgender people for her transparency about her transition. Her YouTube channel, which has over 8,520,000 subscribers as of November 2022, consists mostly of makeup tutorials, vlogs, challenges and inspirational videos about her transition. She is also popular on Instagram, with over 8 million fans as of June 2020.

According to her, after her transition, she became aware of the kind of prejudice that women have to face on a regular basis, which also made her a feminist, in addition to an LGBT+ activist.

Where did Nikita Dragun go to school?

In 2015, she entered the Fashion Institute of Design and Merchandising in Los Angeles to obtain a degree in the field of cosmetics.

How did Nikita Dragun gain fame?

Dragun has over 8 million followers on Instagram, TikTok, and YouTube, posting about her transition, beauty, and style. After her arrest, she is taking a break from social media and YouTube.

In September 2017, she announced her first-ever collaboration with a brand, Bellami Hair, and unveiled her line of three wigs – the Saphira, Khaleesi, and Cassie models.

In March 2019, she launched her line of vegan beauty products, Dragun Beauty, the first cosmetics brand owned by a trans woman. The stock of these products sold out a few hours after the online launch of the brand. Its concealers are partly inspired by the issues that transgender women face in covering their beards. The design of the Dragun Egg is inspired by the bandages that wrapped around her face after her facial feminization surgery.

In 2020, she collaborated with the company Morphe to create a makeup palette: Nikita x Morphe. The names of certain shades in the palette (Estrogen, MTF, metamorphosys) are often influenced by their trans identity and life course.

Nikita Dragun has appeared in the music videos of several singers, including fellow transgender artist Kim Petras. She has been an actress in web series broadcast on Youtube and Snapchat. In April 2021, Netflix announced plans for a reality TV show featuring several Tik Tok star influencers, including Nikita Dragun, from The Hype House collective, a Los Angeles-based content house.