Kaitlyn Frohnapfel: How The “Chosen One”, Choose One Woman For Life 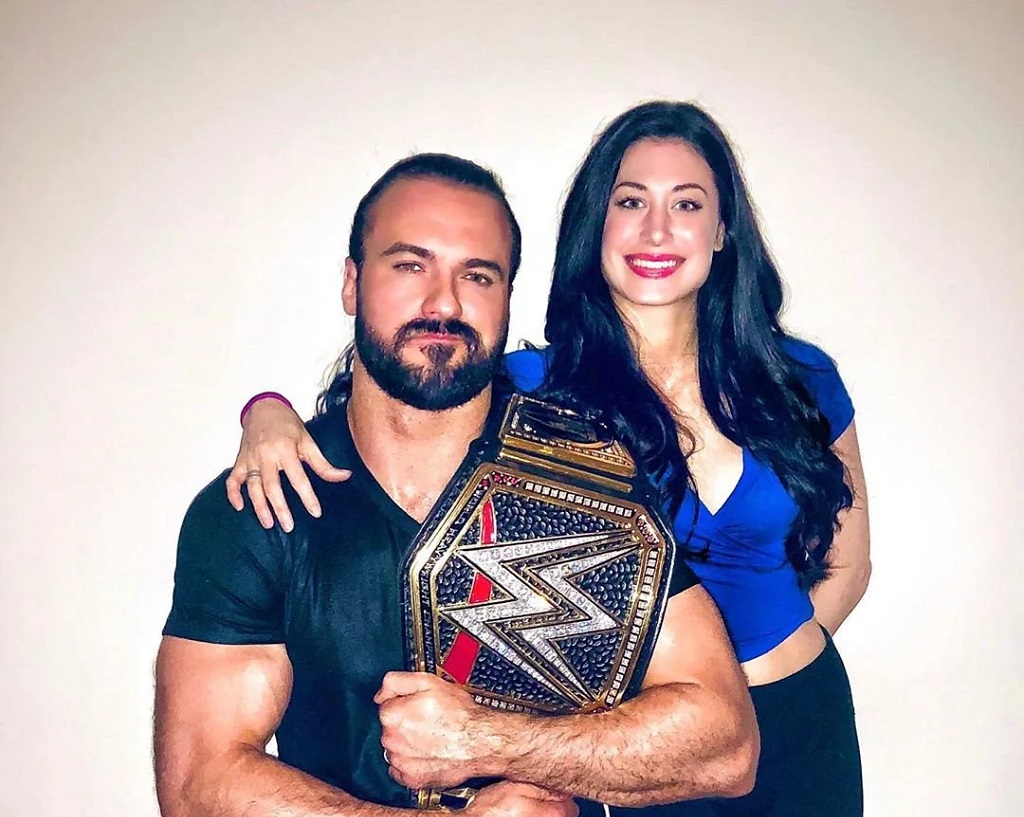 Drew McIntyre has risen through the ranks in WWE over the past few months and is the current WWE Champion after defeating Brock Lesnar at WrestleMania. His wife, Kaitlyn Frohnapfel, is the most proud of his accomplishments. This is her biography.

Net Worth: Not disclosed

As they say, behind every successful man is a woman and such is true in McIntyre’s case as well. The Scotsman’s wife has been quite a good charm for him and has done him good throughout his career.

Kaitlyn Frohnapfel is known for being the wife of the Chosen One, Drew McIntyre. She is an American citizen and is of Caucasian ethnicity.

Not much is known about her social media presence as she continues to remain inactive on major platforms.

Kaitlyn Frohnapfel’s early years are not mentioned in detail like her famous husband.  However, what we do know is that she grew up alongside her sister.  Kaitlyn Ann Frohnapfel was born on December 31m 1991 in Largo, Florida. Her parents are Wendy and Richard Frohnapfel; also the proud parents of daughter Ashley.

Kaitlyn Frohnapfel attended high-school at Largo High School. Similar to her husband, she too had athletic abilities and joined the school’s track and field team. Being a member of one of the most prominent teams in Florida, the Packers, aided Kaitlyn Frohnapfel in building her résumé. In addition to that, graduating from a school with alumni, such as Cory Lopez, Kristina Shannon, Chester B. McMullen and Karissa Shannon, further added a spotlight to her résumé.

Upon graduating high-school, Kaitlyn Frohnapfel joined the University of South Florida. The university, which allows more than 50,000 students, were happy to accept Frohnapfel in their ranks as an active Track and Field athlete. Unfortunately, there has been no news yet regarding her entire educational venture.

Prior to their marriage, they were dating partners since the year 2015.

Many of you may not know it but McIntyre was married once before. Back in May 2010, “The Chosen One” married Taryn Terrell in Las Vegas. The same month the following year, the two split.

But in 2015, McIntyre met Kaitlyn Frohnapfel and on 9th February 2016, the two became engaged after only meeting each other for a few months.

On 17th December 2016, the couple married after dating for almost a year. The two lovebirds live in their lavish house in Tampa, Florida.

The current World Champion and his wife Kaitlyn Frohnapfel who is a fitness model, are cat people and McIntyre often refers to his fur babies as Claymore Cats. McIntyre has two cats who are brothers called Chaz and Hunter and they seem to take up a huge place in the Scottish star’s life.

McIntyre has had no rough patches with Frohnapfel and its safe to say the two are made for each other. Even though there is nearly an entire foot difference in height between the two, they always look great together.

As the relationship between Drew McIntyre and Kaitlyn Frohnapfel disclosed, everyone came to know about her career as a doctor. This brought up many questions, particularly – why did she leave her passion for being an athlete to become a doctor?

However, there has been no response from Kaitlyn Frohnapfel herself with regards to this matter. Yet, one thing’s for certain; she has flourished in her career as a doctor and managed to make the people around her proud. Unfortunately, we are unaware of any other details when it comes to career.

She is a former college athlete as well as renowned American fitness, she earns a handsome sum of salary. As per some online resources, the average salary of personal fitness trainers is around $25.71 per hour or $53.32k annually. So, Kaitlyn also definitely earns a salary in the same range.

Currently, she works as a trainee doctor in Florida through which she is adding an extra sum to her total income. As per the source, the primary physician earns an annual average salary of $223k. So, Kaitlyn may also earn the same in the same pay scale.

What does Kaitlyn Frohnapfel do currently?

Frohnapfel is currently serving as a doctor in the hospital of the United States but further information about her career is not available to the media yet. She came to the media spotlight only because of her husband who is a WWE Superstar.