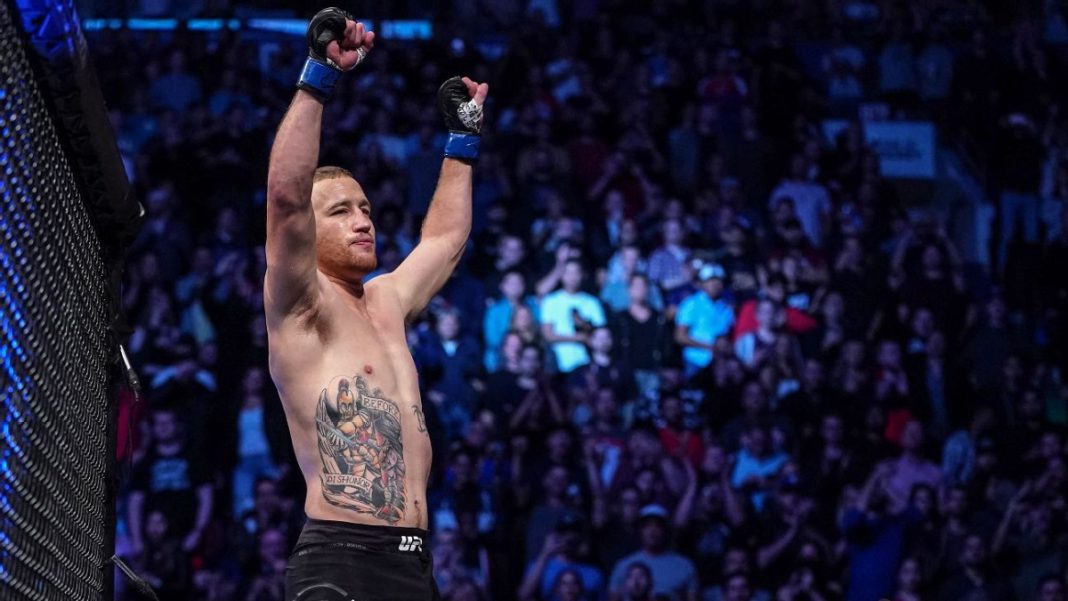 Justin Ray Gaethje, an MMA fighter representing the United States, was born in Safford, Arizona, on November 14, 1988. As of May 9, 2022, The Highlight, a previous interim lightweight champion of the UFC, is presently rated third overall in the division. When Justin was still a college student, he began his profession at a relatively young age. Before that, he worked in a copper mine as his father did, but he quit after a week. Here is all you need to know about his career and MMA statistics.

American mixed martial artist Justin Gaethje, also known as Justin Ray Gaethje, was born on November 14, 1988, in Safford, Arizona. He began fighting just at age of four. He currently holds the #7 spot in the UFC men’s pound-for-pound rankings and competes for the organization as a Lightweight. He is highly known for both his fierce fighting style and his resistance to injury.

Carolina and John Ray Gaethje welcomed twins Justin and Marcus into the world. Justin attributes his accomplishment to all the efforts his parents put in for the family throughout the years. Justin’s twin brother Marcus was always his brother’s biggest promoter. They were best friends throughout their youth. They were a formidable team when they played high school sports together in Arizona. Justin played quarterback & strong safety in football, while Marcus played defensive back and middle linebacker.

Before going to college, Justin’s love was football, and he even wanted to play in the NFL, according to Marcus. According to Justin, he aspired to play in the NFL but was never large enough. He didn’t even think about fighting until he took up wrestling in college. In an appearance by TMZ Sports, Marcus claimed that after meeting a group of wrestling teachers who were somewhat involved in the fight scene and having several UFC fighters visit the wrestling facility, he decided he wanted to or at least attempt fighting.

Justin and Eddie Alvarez will coach This Ultimate Fighter 26 together, the UFC confirmed on July 13, 2017, with the two men slated to square off at the season’s conclusion. The bout with Alvarez did take place at UFC 218 on December 2, 2017. Justin’s TKO defeat in the third round was his first in MMA. He also got the Fight of the Night bonus for the second time in a row during this fight. The judges awarded Gaethje the first round of the fight, but the tide turned in the second when Nurmagomedov gained control on the ground. Khabib swiftly beat Gaethje.

On April 14, 2018, at UFC at Fox 29, Justin was beaten by Dustin Poirier by TKO. Justin received the 3rd straight Fight of a Night bonus award thanks to the contest. Justin has a bout against Al Iaquinta @ UFC Fight Nights 135 slated for August 25, 2018. Iaquinta, however, pulled out of the fight on June 28, 2018, and James Vick took his place. First-round knockout by Justin gave him the victory. In his fourth UFC bout, he also received a Performances the Night award, which would have been the fifth bonus award in a row for him.

On short notice, Justin Gaethje faced Tony Ferguson during UFC 249 for the interim lightweight title. Gaethje knocked Ferguson out in the 5th round after a punch to the head to win the fight and snap Ferguson’s 12-fight winning streak in the UFC. Gaethje outmatched Ferguson in the fight in aspects of striking (143-136 significant strikes), and he fought won unanimously just on the judges’ scorecard.

At UFC 254, Justin Gaethje & Khabib Nurmagomedov squared off to become the UFC Lightweight Champion. Q to pass out and lose the fight by technical submission.

At UFC 268, Justin Gaethje faced Michael Chandler. Gathje pounded in with leg kicks first while Chandler attempted to knock Gaethje out with some powerful blows. In the opening round, Chandler pummelling Gaethje with hard punches before down him with a flying knee. In response, Gaethje grappled with Chandler to quell his fury before unleashing a barrage of vicious uppercuts on Chandler just before the round’s conclusion.

Mixed martial arts (MMA) is a combat sport hybrid that combines elements of boxing, wrestling, judo, muay Thai (Thai combat sports), as well as other styles. Although MMA was at first criticized as a vicious blood sport without regulations, it eventually lost its reputation for no-holds-barred combat and became one of the speediest spectator sports in the early 21st century. All 50 states in the United States as well as numerous other nations permit MMA events. Gaethje has a professional record of 27, with about 24 wins, almost 23 losses, and 4 knockouts, including 12 submissions and 30 decisions.