Girl In The Basement: 8 True Facts About The Film (BTS+Director) 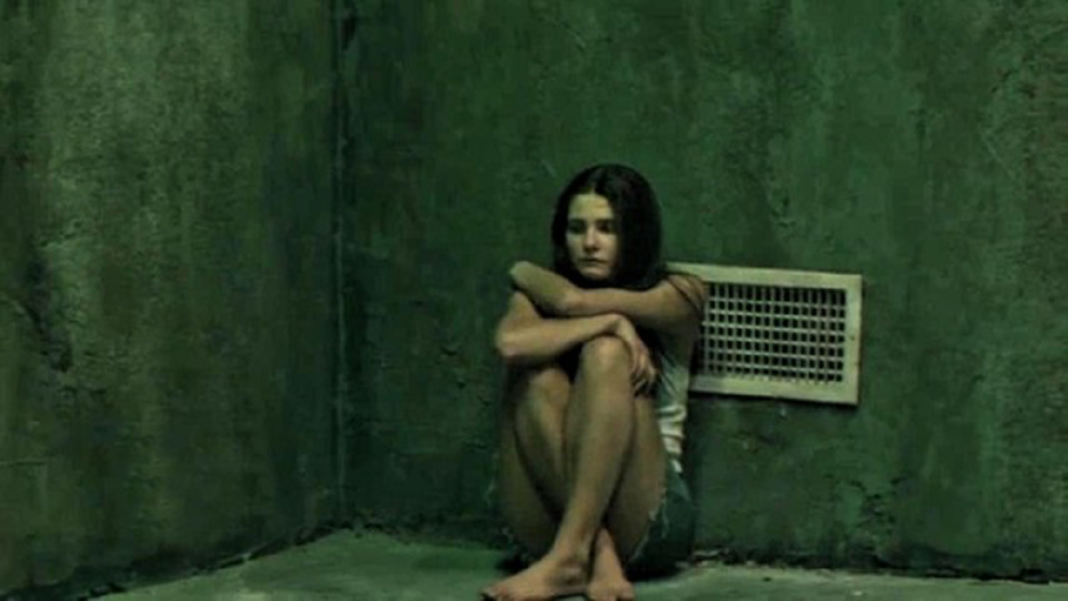 Following the story of Elisabeth Fritzl in a horror film, Girl In The Basement based on her and her dad the infamous Josef Fritzl has been released and it’s based on real people.

Girl In The Basement: 8 Behind The Scenes Facts + FAQs!

8 Facts About Girl In The Basement Movie:

Girl in the Basement is the truly horrific story of Sara, a teenage girl about to turn 18 and her father, Don, who controls and mistreats her as soon as she comes of age.

It’s a new film based on the poignant case of Elisabeth Fritzl, but she was raped for the first time by her father in 1977.

2. The first four years inside her basement Elisabeth Fritzl was completely alone:

During her nearly two and a half decades of clandestine imprisonment in her own family home, she had three children by her monstrous captor, her own father. One died shortly after birth, three lived somewhat normally with her parents in the main house above; three resided with her, locked away from the world without the light of day.

3. An incredible array of actors were chosen by Lifetime:

The film stars former “Brat Pack” stallion Judd Nelson of The now shrunken and truly scary Breakfast Club fame as a maniacal patriarch. Insidious 3 Stefanie Scott shines as the Captive Daughter, and Joely Fisher shrinks in reserve as the Matriarch – playing perhaps the most oblivious (or perhaps accomplice?) mother of all time.

4. The director Elisabeth Rohm is a mother who made movies about bad parents:

Elisabeth Rohm has a daughter Easton August and had to make a movie about  the worst parents imaginable, but she says that parenting influenced her more about how she was going to direct Stephanie Scott because just like the movie Room, there was a magic to this girl in the underground.

Stephanie Scott as a mom would be forced to create normalcy in an environment where she was underground for 20 years with her children.

“And there is this joy and this kind of creativity that she brought into their life, I wanted it to be authentic and Stephanie is very young and has no children. I think she’s done an amazing job being a very convincing and loving mom in the worst circumstances, even when she has to tell her kids what’s really going on”, she explained.

It’s one of the darkest movies you’ll see this year. Or maybe any year. There are difficult scenes between Judd Nelson and Stefanie Scoot. The movie sweetens some of the real story for TV, but there’s no doubt what you’re watching is incredibly heartbreaking.

On the other hand, people had to deal with covid wearing masks and shields and standing six feet apart and taking a COVID swab every three days!

6. Director Elisabeth Rohm says the movie is not entirely based on the Elisabeth Fritzl story:

Girl In The Basement is obviously based on Elisabeth Fritzl but ironically, it’s not entirely based on the Elisabeth Fritzl story. The director says most people know about the Fritzl affair and because of that she was very motivated to use this as inspiration, not necessarily in the script, because of course, it’s an amalgamation of several incidents where the imprisonment, sexual violence, incest, physical violence in family dynamics were expressed.

She also gave a shout out to the victim saying:

“Again, telling this film is not just for sensationalism, but I was really moved by the story of Elisabeth Fritzl. I knew a lot. And I just felt that, ironically, what the world needs now are stories of hope and Elizabeth Fritzl or any woman who has survived something like that – who makes it come alive and then can. going on with her life and resurrecting like a phoenix from the ashes of that abuse – is a story of hope and positivity, like you said, it’s very dark, but she’s a survivor. And so I think it’s a great testament to the triumph of the will, really”.

7. Elisabeth Rohm found Stefanie Scott to be the perfect cast:

“Stephanie Scott was my first choice. We then went through the casting process, but it was still Stephanie Scott to me. I had seen a few reels at the start and picked her out of the group, but then I did the typical casting session, but she had that….I don’t know how to put it, but it was so contained, so self-contained and yet so raw, so unheard, so pure”.

But she, I felt, could wear a movie and that she had the vulnerability and fearlessness to do what she did. And she did. She’s so brave from pregnancies to all these births, to aging there, to the story of incest to her children. I knew she had the chops”.

8. Director Elisabeth Rohm says her film is about liability for abuse:

The victim’s mother in this movie doesn’t actually inquire about a private investigator until her daughter has been missing for years and there are already children of incest in the basement. Usually, the family is more curious about where their children have gone. Is neglect also part of this story? The father is the aggressor, but is the mother an accomplice in pure negligence?

The director wanted to highlight accountability or else abuse could become our worst nightmare and a monster could really form, but in terms of the victim’s mom being an accomplice, the director wants to make us not become an accomplice if they themselves are being abused, if they know of an abused person – that is really what generational and family abuse can be, which is we turn the other cheek because we love someone.

Frequently Asked Questions About Girl in the Basement:

How much of Girl in the Basement is true?

​​Girl in the Basement is all about the Josef Fritzl affair which is sadly a true story about an Austrian man who had a makeshift dungeon he was using to guard his captive daughter. The 2021 film, directed by Elisabeth Röhm, tells the story of Sara (played by Stefanie Scott) who is held captive by her father, Don (played by Judd Nelson) following her 18th birthday.

Going back to what we know of the case, Fritzl kept his daughter Elisabeth captive in a tiny soundproof room for 24 years where he raped her thousands of times and fathered seven children with her, including one who is dead. It started shortly after Elisabeth’s 18th birthday – just like in the movie. Three of the children stayed in the basement with Fritzl’s daughter while the other three were brought up in the family home.

Here’s what is not true: even though Girl in the Basement comes from a true crime background, it’s worth pointing out that the names and details have been changed to protect victims and those involved in real life.

How did Josef Fritzl kidnap his daughter?

According to Oxygen, Josef lured Elisabeth into the basement of the family house and placed an ether-soaked rag over her face. She passed out and he then proceeded to handcuff her and lock her in the underground prison. Elisabeth’s father then coerced her into writing a letter to her mother, Rosemarie, telling her that she wanted to run away from their hometown of Amstetten, Austria, and did not want to be found!.

Josef sexually assaulted Elisabeth almost every day. In 1988, she had her first child, Kerstin, and then gave birth to six more children but unfortunately Michael died three days after birth.

Josef Fritzl, how did he get caught?

Fritzl has been described as someone who “fitted in well” and “held on to himself”, which is why things only came to light when one of Elizabeth’s children fell into a coma and was brought to the emergency ward for treatment. When doctors struggled to figure out what was wrong with the child, they launched a public appeal to Elisabeth Fritzl to introduce herself – because the father’s story was that Elisabeth Fritzl “ran away”.

Mark Perry (a British journalist who was the first to tell the story of the ‘House of Horrors)’, told WHO:’ She was in the cellar watching television and begged Fritzl to let her out with his other children. That’s when he let her out.”

On April 19, 2008, Elisabeth left the cellar for the first time when her eldest daughter, Kerstin, lost consciousness. She returned to the basement shortly after Kerstin was brought to hospital, but a week later she was taken to police for questioning after hospital staff raised concerns with authorities. After many hours, Elisabeth detailed her poignant story, and on April 26, her father was arrested.

Josef Fritzl’s wife was told that Elizabeth ran away:

As he attempts to manipulate his wife Irene into believing that she has run away, he would stealthily visit her and torture her in the basement. After twenty years, this painful case is finally exposed to the family.

Over the years, Josef took some of the children out of the cellar and told Rosemarie that they had been sent by Elisabeth, who needed help raising them. Rosemarie believed it, and they began to welcome the children as foundlings.

Until then, Fritzl’s wife, Rosemarie, learned that Elizabeth had left home years before and joined a cult, only to get rid of three of her children at their doorstep. Little did she know that these three children had been fathered by her husband and daughter.

British journalist Mark Perry, who was the first to tell the story of the ‘House of Horrors’ spoke to Fritzl’s attorney, Walter Anzböck, and Fritzl reportedly said, “It’s okay to have a family in the basement”.

The reporter added, “He doesn’t believe he did anything wrong at all. He thinks it is a failure of justice and that he was wrongly locked up.”

Where is Josef Fritzl now?

Less than a year after his 2008 arrest, (April 2009), Josef pleaded guilty to murder charges for his negligence in connection with Michael’s death. As well as charges related to slavery, incest, rape, coercion and false incarceration of Elisabeth. He was sentenced to life imprisonment at Garsten Abbey, where he still resides today. In 2021, he will be 86 years old.

Where is Elisabeth Fritzl today?

Elisabeth Fritzl was given a new name after the trial to ensure her privacy, and she now lives with her six children in an unidentified town in Austria known to the media as “Village X”.

“The children, now aged 17 to 31, sleep in rooms whose doors are permanently open after having followed weekly therapy sessions to eliminate the traumas they have suffered inside the cellar”.

“Their two-story family home is kept under constant surveillance by CCTV cameras and patrolled by security guards, while any stranger caught roaming the area can expect to be stopped by police in the surrounding areas ”.

Fritzl is also said to be in a relationship with her former bodyguard, Thomas Wagner, who lives with her and her family.

Where can I watch Girl In The Basement?

Girl in the Basement first aired Saturday, February 27 on Lifetime, but is not available to stream on Netflix. However, those who have subscribed can watch the Lifetime movie with an active subscription to Hulu + TV Live which coincidentally offers free trials for new customers.