Erling Haaland: The Norwegian Youngster Who Is Taking Over The Football World 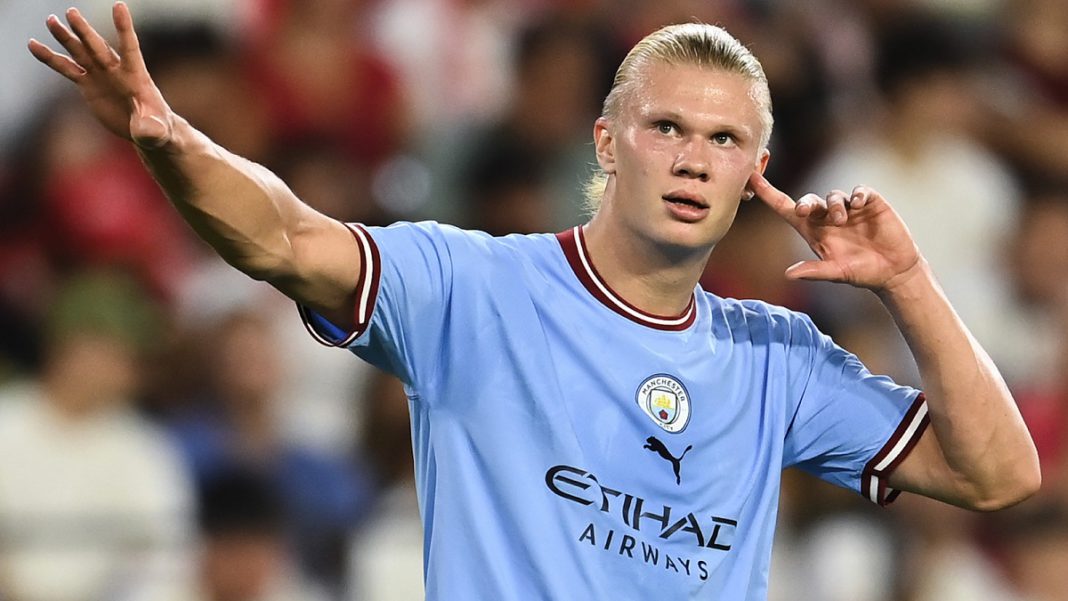 Erling Braut Haaland is a Norwegian footballer, considered one of the world’s best strikers, who has set several international scoring records. Erling Haaland currently plays for English Premier League Champions Manchester City. In his first month at the club, he was named Player of the Month in the Premier League in August 2022 after scoring nine goals in five games. In the 2021 season, he became the first male Norwegian footballer to top score in the Champions League with ten goals. He is unanimously believed to be one of the greatest young players in the world and is poised to take over the world of football. In this post, we will find out more about him. Let’s get started.

Erling Haaland: All You Need To Know

When was Erling Haaland born?

Erling Braut Haaland was born in Leeds on July 21st, 2000. His father, Alf-Inge Haaland played in the 2000 season for Leeds United.

What is Erling Haaland’s play style?

Haaland’s most important qualities as a soccer player are world-class speed, power and scoring threat. He is particularly adept at positioning himself in front of the goal, acquiring goal scoring chances through smart movements, and the goals can come both as technical delights and rock-hard shots from various angles and positions. He has also shown himself to be a good passer, who often sends goal-scoring breakthrough passes, and through his strength and power, he is good at keeping the ball in situations of need. Erling Haaland is very tall and with his height of 194 centimetres, he is a deadly aerial threat.

Erling Haaland played for Bryne’s academy as a youngster. In 2015 and 2016, he impressed Bryne’s reserve team and scored 18 goals in 14 games. He made his debut for the A-team at the age of 15 and is recorded with 16 matches, but no goals.

The big breakthrough came after he was sold from Bryne to Molde in 2017. In April of the same year, he made his debut for the club and scored one goal in the 3–2 victory in the cup away to Volda. In August, he scored his first goal in the Eliteserien in the 2–1 win away to Tromso. His first season for Molde ended with 20 games in the cup and series and four goals.

In the following season, 2018, Haaland showed great progress and impressed to an ever greater degree, especially in an away match against Brann on 1 July, where he scored all of Molde’s four goals within 17 minutes (from the 4th to the 21st minute). The match ended 4–0. After the match, Molde’s coach Ole Gunnar Solskjær said that the club had received several offers for Haaland. Haaland continued to score steadily throughout the season and became Molde’s top scorer with twelve goals in 25 games in the Eliteserien.

On 19 August 2018, Haaland signed a five-year contract with Austrian Salzburg, valid from 1 January 2019. In the spring of 2019, he got a few games divided between series, cup and international, but most often came in from the bench. In the summer, he was fully involved and hit the ground running. He scored his first hat-trick in the cup against SC–ESV Parndorf on 19 July, then another hat-trick in the series against Wolfsberger on 10 August and a third hat-trick a month later against TSV Hartberg. He thus stood on the books with eleven goals in seven games, which attracted great international attention.

When he also scored in the next three games, he became the first teenager to score, first in the first four games, and the first in history to score in the first five games in the Champions League. He is also, along with established star players such as Neymar, Robert Lewandowski, Alessandro Del Piero and Cristiano Ronaldo, in the exclusive company to have scored in five consecutive Champions League games, but the only one to do so in their first five games.

His extreme ability to score made him interesting to the big clubs in Europe and several of them wanted him in their ranks, including Manchester United. He nevertheless went to Borussia Dortmund in the German Bundesliga. With his baggage from Salzburg, he got “the double” in 2019, both the Austrian league and cup championship and was named Player of the Year in 2019.

On 1 January 2020, Haaland was ready for Borussia Dortmund, with immediate success.

In his debut against Augsburg, Haaland came on after 56 minutes and scored a hat-trick in 23 minutes, becoming the second Bundesliga player of all time with a hat-trick in his debut. The first was Pierre-Emerick Aubameyang. In Haaland’s second match for Dortmund against FC Koln, he came on as a substitute in the 65th minute and scored two goals. He thus became the first Bundesliga player of all time to score five goals in his first two games.

Haaland was named Bundesliga player of the month in his first month of action. He also won the best newcomer award in January and February 2020.

In the 2021/2022 season, the club was eliminated in the group stage. Due to injuries, Haaland only played three of Borussia Dortmund’s six games, but scored three goals.

In the Bundesliga, Erling Haaland was an important contributor to the club’s success in 2020, where the club took second place in the series after Bayern Munich. Haaland arrived in the middle of the season and scored 13 goals in 15 games. He became the first player in history to score seven goals in his first three games in the Bundesliga.

The following season, 2020/2021, in which Borussia Dortmund finished 3rd in the series, he scored 27 goals in 28 games and was 3rd in the scoring statistics. In the 2021/2022 season, the club again won silver in the series, also this time beaten by Bayern Munich.

On 1 July 2022, Haaland joined Pep Guardiola’s Manchester City and was an immediate success. He was named Premier League Player of the Month for August after scoring nine goals in five games, the most goals in August of all time, including two hat-tricks in a row. He also entered the history books as the only player to be named Player of the Month in his first month in the Bundesliga (January 2020) and the Premier League (August 2022). In addition, he became the first in the history of the Premier League to score in four away games in a row, and no one has previously scored nine goals in five games in the top English series.

As of September 2022, Haaland was the top scorer in the Premier League with eleven goals in seven games.

Haaland has played on age-specific national teams since he was 15 years old. In March 2018, he scored a hat-trick for Norway’s U-19 national team in the 5–4 victory against Scotland, who thus qualified for the European Championship. There, Norway was eliminated in the group stage after a win over Finland, a loss to Portugal and a draw against Italy.

During the U-20 World Cup in 2019, Norway was eliminated after the group stage due to losses to Uruguay and New Zealand, but Haaland nevertheless became the tournament’s top scorer with nine goals, all scored in the last match of the group stage, where Norway beat Honduras 12–0. He is therefore the tournament’s all-time leading scorer, and also the all-time top scorer in an U-20 international match.

On 16 May 2020, the Bundesliga reopened after the corona pandemic. Erling Haaland could celebrate the event by scoring his tenth goal in the German top flight in nine games.

Haaland took “the double”, victory in both series and cup, with Salzburg in Austria in the 2018-2019 season.

Already at a young age, Erling Braut Haaland was awarded several prizes and awards, the most prominent being “Player of the Year” in Austria in 2019. UEFA made him the breakthrough team of the year in the Champions League in 2019, and during the U-20 World Cup he was top scorer and awarded “The Golden Boot” ( The Golden Boot ). In 2018, he was named the young player of the year in the Eliteserien and the “Breakthrough of the Year” during the Sports Gala in 2020. In November 2020, Haaland was named Europe’s best male player under the age of 21 by the Italian sports newspaper Tuttosport and awarded the Golden Boy award

In December 2020, Haaland was awarded Aftenposten’s gold medal for his scoring record in the Champions League and this year’s comet in international football, while the English newspaper The Guardian named him the world’s sixth best footballer in 2020.

Haaland was awarded the Golden Ball as Norway’s best male player in 2020 and 2021.

Who is Erling Haaland’s football hero?

Erling Braut Haaland himself has stated that his football hero is his father, who inspired him to become a professional footballer. Erling’s goal as a footballer is to be better than his father, who played 34 games for the Norwegian national team and over 200 games in the English Premier League.

Who is the father of Erling Haaland?

The father of Erling Braut Haaland is called Alf-Inge Rasdal Håland, and he too was a professional footballer between 1990 – 2012. Just like Erling, Alf-Inge started his career in Bryne, before moving to England to play for Nottingham Forest, Leeds United and Manchester City. He ended his football career in Rosseland in July 2012.

Can Erling Haaland play for England?

FIFA rules state “Any player who is a naturalized citizen of a country by virtue of its laws is eligible to play for a national team or representative team from that country.”, meaning Erling Braut Haaland can play for the England national team. Nevertheless, he has chosen to play for Norway.

Erling Braut Haaland chose to play for Norway since he has represented the nation on various U-national teams, from U15 up to U21. Now he is on the A national team.

How tall is Erling Haaland?

Who is Erling Haaland’s agent?

The sports franchises in Ohio that we have known and loved have a rich history. With the choice of either pro teams or college...
Read more