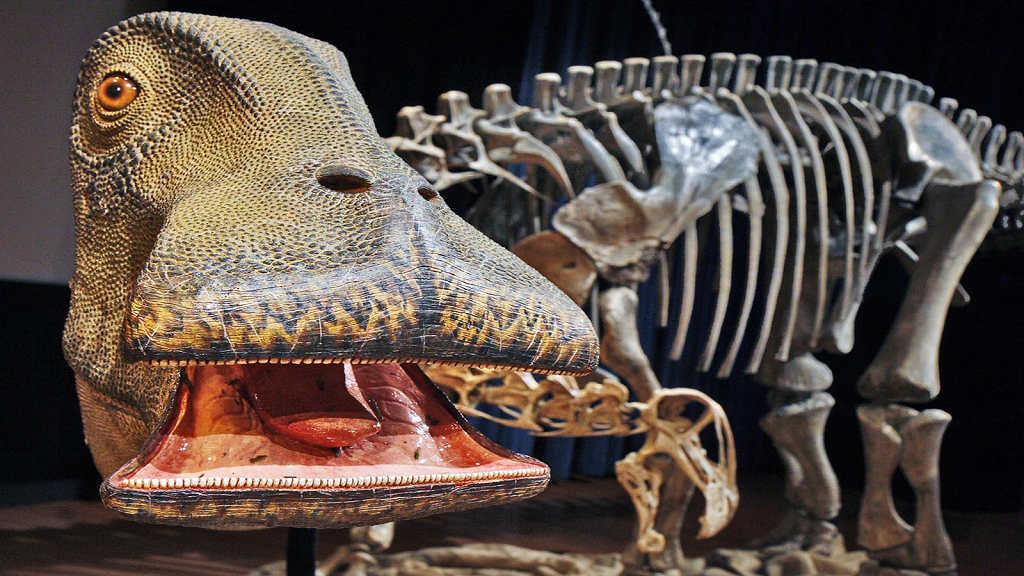 A trend that took Twitter by storm recently involved twitterati asking their unsuspecting friends to Google “What dinosaur has 500 teeth?” Have you been pranked with this already? Do you know the answer to this question? If not, then continue reading this post. We will talk in brief about the meme and also discuss the actual dinosaur in detail. Whether you love memes or you love dinosaurs (or you love both), you are going to enjoy reading this.

The Dinosaur With 500 Teeth: All You Need to Know

The dinosaur with 500 teeth: How did the meme start?

Social media platforms are well known for their funny pranks. There is some new joke or prank doing the rounds every other day. We recently witnessed ‘why were chainsaws invented?’ and ‘why were graham crackers invented?‘ These memes have become quite popular with social media users in recent days.

Memes/pranks generally become popular due to their entertainment factors, but this time “What Dinosaur Has 500 Teeth” has taken a darker turn. The meme made its online debut on a subreddit where a young reddit user said “/ r / teens:” Whatever you do, don’t Google ‘dinosaur with 500 teeth.’

Although this reddit account is no longer available, memesters are creating countless memes using this post. A meme creator has created the following caption “don’t google 500 tooth dinosaur. The worst mistake of my life “

If you are an active Twitter user, you may have seen this viral meme. After originating from Twitter, this meme has made its way onto almost every social media platform. Many users have fallen victim to this sick prank, while others ask whether to Google “What dinosaur has 500 teeth?” Or not.

Users who have already reviewed this meme are suggesting to all other users not to search for it. A lot of people who are unfamiliar with world geography and don’t know about the river Niger (pronounced nai-jer) or the Republic of Niger, are mispronouncing the dinosaur’s name in a manner that is racially offensive. Now that you have read this far, you shouldn’t have any problem pronouncing the name correctly. With the comedic stuff behind us, let’s delve into the actual origins of the Nigersaurus.

Where was the dinosaur with 500 teeth found?

Reconstructed Nigersaurus skeleton at a museum

Nigersaurus (biological name: Nigersaurus taqueti) was found in the Elrhaz Formation of the Tegama Group, in an area called Gadoufaoua, located in the Republic of Niger. It is one of the most commonly found vertebrates in that formation. The first remains belonging to Nigersaurus were discovered during an expedition between 1965 and 1972 to Niger by French paleontologist Philippe Taquet and were first mentioned in an article published in 1976. Despite being a common genus, the dinosaur had been little known until additional material was discovered during expeditions led by American paleontologist Paul Sereno in 1997 and 2000. Limited understanding of the genus was the result of poor preservation of its remains, which arises from the delicate and highly pneumatic constitution of the skull and skeleton, which in turn, causes the disarticulation of the fossils. Some of the skull fossils were so thin that a beam of light could easily be seen through them. Therefore, no intact skulls or articulated skeletons have been found, although these specimens represent the most complete rebbachisaurid known.

Nigersaurus wasn’t named and described in greater detail by Sereno and colleagues until 1999, based on the remains of newly found individuals. In the same article, he also named Jobaria, another sauropod from Niger. The name of the genus Nigersaurus, which means “reptile of Niger”, is a reference to the country where it was discovered, and the name of the species, taqueti, is in homage to Taquet, who was the first to organize large-scale paleontological expeditions in Niger. Limb material and a scapula found nearby were also referred to as the same specimen. These fossils are found in the Niger National Museum.

When did the world come to know about Nigersaurus?

Paul Sereno with a Nigersaurus model

Paleontologists Paul Sereno and Jeffrey A. Wilson presented the first detailed description of the skull and feeding adaptations in 2005. A more detailed description of the skeleton was published in 2007, based on a specimen discovered ten years earlier. The fossils, along with a mounted reconstructed skeleton and a plastic model of the head and neck, were later presented to the National Geographic Society in Washington. Nigersaurus was dubbed the “cow of the Mesozoic” in the press, and Sereno stressed that it was the most unusual dinosaur had ever seen. He compared his physical appearance to Darth Vader and a vacuum cleaner, and his shearing teeth he described as a mix of conveyor belt and sharp piano keys.

Teeth similar to those of Nigersaurus have been found on the Isle of Wight and in Brazil, but it is unknown whether they belonged to the relatives of this taxon, or to titanosaurs, whose remains have been found in the vicinity.

What did the dinosaur with 500 teeth eat?

Sereno and his team suggested that Nigersaurus was a grazer that grazed at ground level, and was not very selective. The width of the mouth and the lateral orientation of the row of teeth show that the sauropod was able to gather a lot of food and trim it close to the ground, one meter from the surface. This is supported by the outside views of the upper teeth, similar to Dicraeosaurus and Diplodocus, which are evidence that the food or substrate consumed wearing teeth of the animal to the feed. Nigersaurus also has signs of wear at a low angle on the inside of the crowns of the maxillary teeth, suggesting that the movement of the mandible was limited to precise up and down movements. Wear on the jaw has not yet been discovered, but is expected to be the opposite of wear on the upper teeth. The ability to raise its head above the ground does not necessarily mean that it fed at that level, and the short neck of Nigersaurus would have restricted its feeding range compared to other diplodocids.

It is estimated that Nigersaurus had one of the weakest bites among sauropods. Furthermore, the nearly parallel nature of the small scratches on teeth and bones (caused by gravel, which would not occur as often in taller browsers) indicate that it ate relatively soft herbaceous plants, such as ferns of low growth.

Why did the Nigersaurus have 500 teeth?

Due to the lateral orientation of the teeth, the Nigersaurus probably would not have been able to chew. Nigersaurus spent its dental crowns faster than other herbivorous dinosaurs, and tooth replacement rate was the highest of any dinosaur known. Each tooth was replaced once every 14 days; it had previously been estimated that this rate would be much lower. In contrast to Nigersaurus, sauropods with low tooth replacement rates and wider dental crowns are believed to have been canopy- feeding browsers. The animal, from which 80% of the skeleton has now been recovered and which starred on the December cover of ‘National Geographic’ magazine, is a herbivore that lived 110 million years ago and measured about 30 feet long. Rather than feeding like a giraffe, which other sauropods did, it did so like a cow, looking for food near the ground. Its straight snout, with more than 50 sharp teeth on each jaw, sliced ​​through the foliage like scissors. As if that were not enough, behind each tooth there were others to replace it, up to more than 500. Also, their bones had more air than bone. The vertebrae are like paper. It’s hard to imagine them enduring the stresses of everyday life; but somehow, they managed to do so quite successfully, thriving during the Lower Cretaceous period of the Mesozoic era.

Understanding which ear is the gay ear deals with celebrating homosexualism through a piercing! This dates back to a kinky time in the 1980s,...
Read more
About

The most dangerous men in the world add instability to the world and have the power to disturb the order of the world in...
Read more