Brittany Matthews: Things You Might Not Know About Patrick Mahomes’ Girlfriend 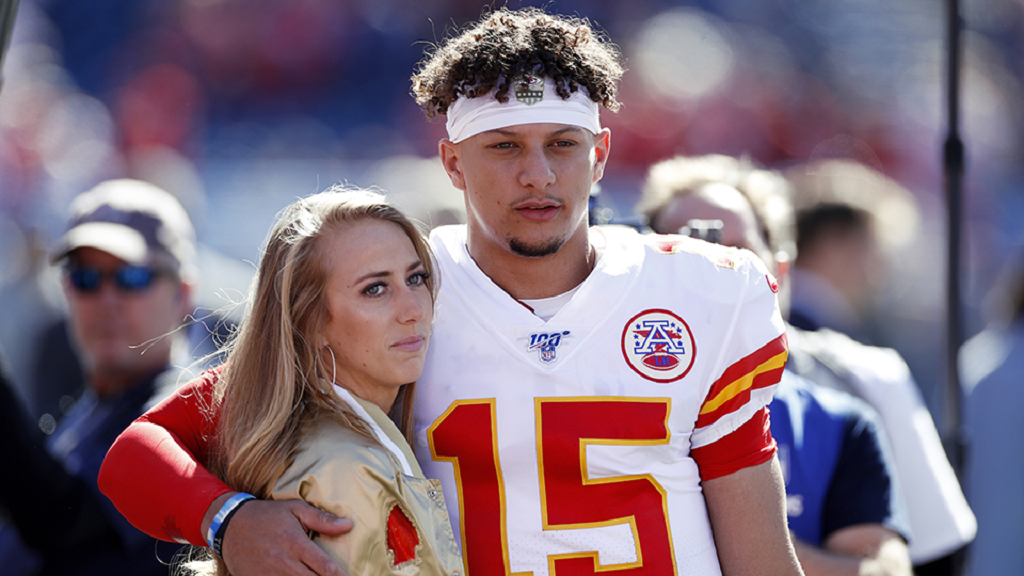 As far as names go, Brittany Matthews isn’t someone that everyone knows. Especially when compared to her famous boyfriend, Patrick  Mahomes, very few people know Brittany matthews. Yes, she is the girlfriend of a major sports star, but she isn’t one of those gold digger types/ She isn’t a model or an actress, nor does she have some hit social media channel. She is less like a magazine centrefold and more like a beautiful girl next door. Here are some things you should know about Brittany Matthews.

Who is Brittany Matthews?

If you’re a die-hard Kansas City Chiefs fan, you might want to know who Patrick Mahomes’ would be wife is, Brittany Matthews. But before we get into who his fiancée is, let’s explain why Mahomes and Matthews are the couple to watch, even if you’re not a football fan.

For those who don’t follow the NFL, Mahomes is the star quarterback for the Kansas City Chiefs. He played in his first Super Bowl in 2020 during Super Bowl LIV, where he led the Kansas City Chiefs to victory over the San Francisco 49ers. (The game was also the first time the Chiefs competed in the Super Bowl since 1970.) After their victory, Mahomes was the Super Bowl MVP and became the youngest quarterback and the third-youngest player to win. the award in NFL history.

On the sidelines was his longtime girlfriend and now fiancé Brittany Matthews. Mahomes proposed to Matthews on his 25th birthday on September 1, 2020. Mahomes proposed to Matthews in a suite inside Arrowhead Stadium, where he posted Instagram stories and videos of her cheering him on in the stands before he left. kneel. As for how Mahomes asked the question, Matthews shared an Instagram story following a flower arrangement that spelled the words, “Do you want to marry me?” She also posted a photo of her ring, which was a huge square-shaped diamond on a band decorated with smaller diamonds. “Ring SZN,” the post captioned.

Do Patrick Mahomes and Brittany Matthews have a child?

Not long after her engagement Matthews announced that she was pregnant with her and Mahomes’ first child. She revealed the big news in an Instagram post of her and her NFL boyfriend holding an ultrasound of their baby, as they looked at her and smiled. “Mom and Dad, taking a little detour to the wedding,” the post captioned. The couple welcomed its first child Sterling Skye Mahomes on February 20th, 2021.

How did Patrick Mahomes and Brittany Matthews meet?

Well, they’re both actually high school sweethearts. According to Yahoo Sports, Mahomes and Matthews met at Whitehouse High School in Whitehouse, Texas, and began dating in the 10th grade. “He just became one of my best friends, like all his other friends,” she recalled in an Instagram post. “I never liked him, we were just best friends.”

She went on to reveal that she fell in love with Mahomes a year later after an “embarrassing” moment in which he gave her a Valentine card and a rose. “He brought it to me as a funny joke, but as if I thought it was the cutest thing in the world,” she recalled. “Everyone in the cafeteria started yelling like, ‘Kiss her! Kiss her! Kiss her!’ After a moment, he knew that Mahomes was the one. “So boom, we just fell in love,” she said.

The two even attended prom together, as seen in an Instagram post Mahomes shared in 2013. “Best prom date a guy could ask for! # prom2013 #bestfriend #greatnight, ”he captioned the post, which featured Matthews in a gold skirt and white blouse and Mahomes in a black tuxedo with a gold vest. Matthews was a year ahead of Mahomes in high school. She graduated in 2013 and went on to play college soccer at the University of Texas in Tyler, Texas, while Mahomes, who graduated in 2014, attended Texas Tech University in Lubbock, about 440 miles away from his girlfriend.

In January 2017, Mahomes announced that he decided to give up his senior year in college to enter the 2017 NFL Draft, which led to his job as quarterback for the Kansas City Chiefs. Matthews, meanwhile, graduated from the University of Texas in 2017 with a degree in kinesiology. In an interview with TODAY in 2020, Matthews revealed that she didn’t even know how good an athlete her boyfriend was until he told her. “When we started dating, I had no idea that he was good at sports,” she said. “The quarterback had graduated, and I was talking to (Patrick) like, ‘So who will our quarterback be?’ And he said, ‘Well, I think I’m going to give it a try.’ I was like, ‘Wait, do you play quarterback?’ “

She continued, “He ended up going to Texas Tech, and that’s when I really realized,” Oh s**t, he could go play professional football. It was surreal to see him live his dream and to see him grow as an athlete and as a man in general, it was just incredible. “

As for what their relationship was like in high school, Mahomes revealed that the two had the usual high school couple romance. “I think at that point we had been dating for a couple of months,” he said. “Just a normal teenager who shows up at the family dinner and is nervous and all.”

What does Brittany Matthews do?

Although Matthews is not an NFL quarterback, she does have athletic blood in her system like her boyfriend. After graduating from the University of Texas with a degree in kinesiology, Brittany, who played college soccer, went on to play professional soccer with UMF Afturelding / Fram in Iceland. She started with the team in May 2017 and her team won their first league title in 2017. However, in October 2017, she was back in Kansas City cheering for the Chiefs.

“Every coach I’ve had at UT Tyler had a huge impact on my love for this game and my decision to play professional soccer,” Matthews told the Tyler Morning Telegraph in 2017 about why she decided to play soccer professionally in Iceland. “An opportunity opened up for me in Iceland and I could never pass up such an incredible experience to do what I love.”

As for her current job, Matthews is a personal trainer, according to her Instagram bio, and is a co-owner of the National Women’s Soccer League in Kansas City. Matthews also has her own website and fitness brand, Brittany Lynne Fitness. The website offers several training programs, such as a pregnancy training guide for $ 70, a 55-page weight training guide for $ 60, a glute training guide for $ 30, and a high intensity interval training guide for $ 40. The site also sells sportswear with slogans such as “Be Fierce” and Be Strong, “as well as the Matthews logo of a capital letter B, with an attached dumbbell. Along with her business, Matthews also appears to be influencing health and fitness. She has promoted brands such as Natural Made Vitamins and BioSteel Sports. At the time of Mahomes’ second Super Bowl in February 2021, Matthews had around 800,000 followers, but that number is expected to grow.

Currently linked with the NFL Network Melissa Stark is a popular sports host and sports news commentator who once worked for NBC starting in...
Read more